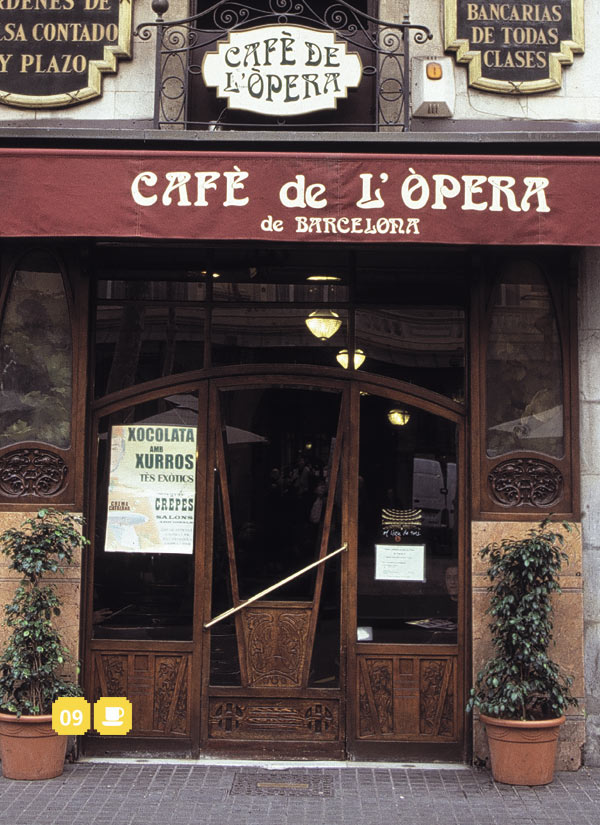 In the same year as the International Exhibition, 1929, Antoni Dòria rented premises in the popular Rambla del Mig of Barcelona, just opposite the Teatre del Liceu, and gave it the name “Café-Restaurant de l’Òpera”. From then to now the café has been run by the same family. The establishment continued to operate as a restaurant, attracting a very select clientele because of its renowned cuisine. In the 1940s it was unable to continue to offer a good quality cuisine because of the shortage of food in the post-war period, so it became just a café.

This café occupies the premises that were formerly used by the very popular Xocolateria La Mallorquina, which served hot chocolate and meals. This establishment is mentioned as early as 1890. It is also known that in 1863 it was occupied by the confectioner’s shop Confiteria La Palma. When Antoni Dòria rented the establishment, the decoration was practically the same as it is today. It had been commissioned by the owner of La Mallorquina, Manuel Docampo, a Galician by birth, and was carried out in the 1880s by Amigó.

Subsequently, the premises were not restored until 1950. This involved the creation of a bar in the style of an original small cash desk that was located at the entrance to the café. The original furniture at the very entrance to the café was also changed: the round marble tables (vetlladors) with wicker chairs were replaced by upholstered chairs set around wooden tables. A second restoration was carried out in the 1980s, this time involving the paintings and furniture, and the bar was again changed and extended by Antoni Moragas i Spa. The restoration of the painted wall panels revealed a totally Vuitcentista style decoration of vases with flowers underneath them, which was previous to La Mallorquina and could be attributed to the Confiteria La Palma.

On arriving at the café, the first thing that calls the attention is the main door. It has a wooden frame with carved floral and vegetable motifs forming sinuous lines in the Modernista language, combined with the two marble door jambs depicting the same motifs. In the interior one first enters a space with two pairs of tables on each side forming a central corridor that leads to the bar, where the space narrows before opening out into a large hall. The two spaces were formerly separated by glass partitions, but now only the frames have been conserved. In 1992 two rooms were opened on the upper floor, with a decoration that is faithful to the 18th century style of the original building.

The structure of the establishment is particularly visible in the inner hall. It can be dated to the 18th century because of the use of cast iron columns with the capitals extended to support the wooden joists, in the fashion used before the existence of laminated beams, and because of the ceiling decorated with vegetable motifs (palmettes and flowers) and geometric patterns (rectangles, pyramids, etc.). On the walls, painted cloth panels are combined with three different motifs: two of them show young girls with innocent poses carrying baskets and flowers in their hands and the third shows a vase with flowers. All the panels are framed by plaster mouldings painted in the same dark green and bone colours, and these mouldings are also repeated on the ceiling.
Alternating with the paintings there are mirrors etched with female figures whose clothing seems to identify them with the characters of several operas. They are sensual women with sinuous lines and varying poses that are more in line with the Modernista language. Below these paintings and mirrors there is a tiled wainscot that was formerly lined with fibre panels in the inner hall and wood at the entrance.
The furniture in the entrance lounge was modified, but in the inner hall the wooden tables and Thonet chairs, which were very popular at the time, have been preserved and restored. The more modern chairs were also made by the Thonet firm.

Over all these years the Cafè de l’Òpera has been a place of meeting and conversation for the most diverse characters who have lived in and passed through Barcelona. In the Republican period (1931-1939) it was a meeting point of politicians of the Lliga and of Esquerra Republicana—such as the person who would later be the President of the Generalitat (Catalan Government) in exile, Josep Irla—and during the Civil War it was popular among the members of the International Brigades. At the end of the war, the establishment fell into a quieter period, which came to an end in the 1950s with the arrival of tourists. In the 1960s it recovered its traditional role as a place for cultural gatherings and meetings of customers who are today well-known, such as the writers Maria Aurèlia Capmany and Terenci Moix, the painters Modest Cuixart and Joan Miró, and the playwright and actor Sacha Guitry. Of course, in the course of its history the Cafè de l'Òpera has also been regularly frequented by the opera singers: Chaliapin, Toti del Monte, Rosich, Montserrat Caballé, Carmen Valor, Luys Santaria and César González Ruano are some of the best-known names.

From then to now the clientele of the Cafè de l'Òpera has been very varied, keeping alive the original character of the establishment and its role as a meeting place. The clients are also far more cosmopolitan than when it was founded, representing different ages and milieus but with a generally informal and bohemian appearance. The establishment is one of the city’s “classic” establishments, and was deservedly proclaimed Ramblista d'Honor (Honorary Rambla Member) in 1997. In the mornings it is frequented by small groups of tourists and natives having breakfast and reading the paper in a relaxed atmosphere; in the afternoon, on the other hand, it gets more lively and is filled with Catalans and foreign residents who create a youthful and multicultural atmosphere.

In this establishment you can have a good cup of coffee from its wide range, which features in particular the Cafè de l'Òpera (coffee with chocolate mousse). If you prefer tea, you can choose from a selection of about thirty varieties. The hot chocolate is also a special tradition of the café, and for the later hours there is a good selection of whiskeys, wines and cavas, as well as Spanish and imported beers. One can also eat there at any time of the day, mainly tapas, cold cuts, a varied range of cheeses, sandwiches and specialities of the season, all at reasonable prices.

In line with the character of the establishment, the rooms on the upper floor may be reserved for cultural gatherings, debates, book presentations and small celebrations. With a capacity for 15 persons in each room, a booking only means that each person attending must buy a drink.