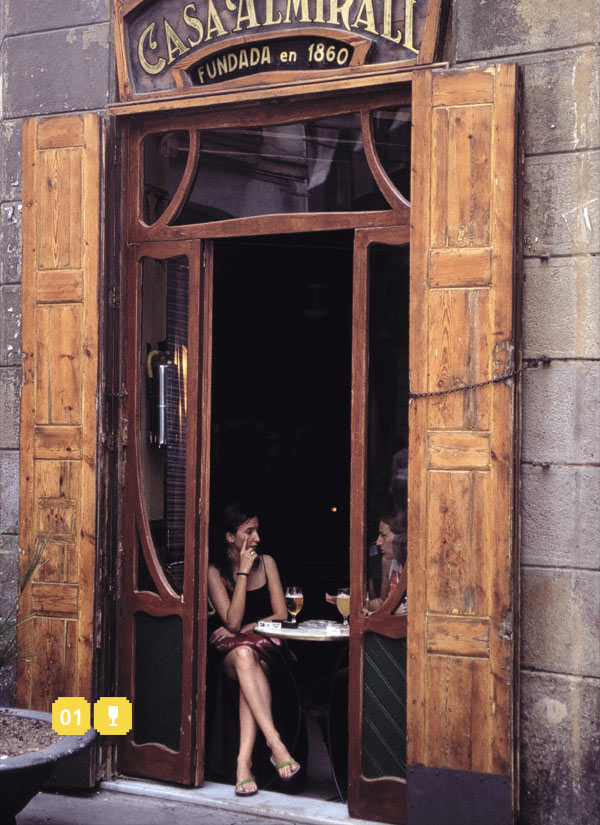 The sign of the Casa Almirall, in painted glass, tells us that it was founded in 1860. Manel Almirall, a member of the Almirall family of distinguished businessmen, was the founder of a tavern in the second half of the 19th century. The premises had two differentiated parts: the first was the tavern itself and the second was the wine cellar. In 1976 the establishment was acquired by the current owners, Ramon Solé and Pere Pina. It was reopened on 1 January 1977 and was restored in 2000, and again in 2001 to build new toilets.Of the original decoration, the door, the counter, the display cabinet and the lights have been conserved practically intact, and all the elements show a great richness and quality in the materials used. The door of the bar is quite simple, because during a large part of the year it was taken down and replaced by a small curtain that concealed the upper part of the entrance and opened the premises onto the street. The forms of the door show no outstanding ornamentation, except for the sinuous lines of the wood.

The visually imposing counter is made of white Catalan marble combined at the bottom with Italian marble of different colours. At one end of the bar stands a cast iron sculpture of great quality representing a female figure, which is the image of the muse of the Universal Exhibition of Barcelona held in 1888. This may be a decorative element salvaged from the demolition of the balustrade of the house that the Almirall family had in the same street. At the end of the counter there is a cash desk, in a similar style to that of the display cabinet, which still serves the same purpose.

The display cabinet behind the counter gives great character to the establishment and is perhaps the most recognisable element within the Modernista language. The most outstanding effect of the decoration is created by the woodwork, with curved lines going towards the side where they meet other lines, interlacing to form a dense ornamentation of branches with leaves and flowers that emerge from the end of display cabinet and rise upwards.

Finally, the many restorations that the premises have undergone have respected a garland painted in bright colours at the top of the wall, which must have belonged to the original decoration of the building in which the bar is located. The building features sgrafitto work on the exterior.

Today the establishment also has two differentiated parts: the first room furnished with the characteristic vetlladors, round marble tables with a single leg that were used in all the establishments of the time; and a second, more intimate space separated by a glass partition, with gentle lighting and armchairs. The music played in the bar consists mainly of modern and classic jazz, as well as other styles, in a wide variety of the best instrumental music. The Casa Almirall is a meeting place for people of all ages and milieus to have a drink and a snack. Anchovies are its speciality. It is also a venue for occasional cultural activities such as cinema cycles or cultural gatherings to discuss a varied range of subjects. It is a space that is open to new proposals and diverse activities, a meeting point for the early evening with a relaxed atmosphere. It tends to get livelier in the early hours, but one can often find a quieter spot in the interior.