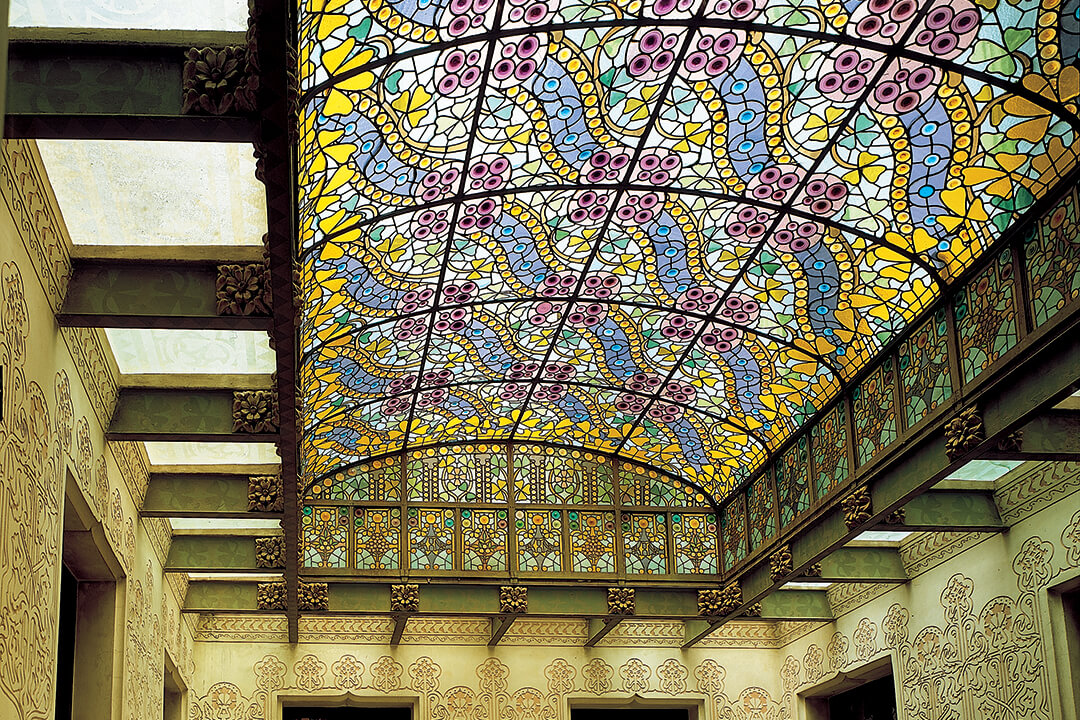 The history of this building changed between 1898 and 1900, when the chocolate manufacturer Antoni Amatller, who was also a philanthropist, amateur photographer and glasswork collector, bought an uninteresting building erected in 1875 in Passeig de Gràcia to use as his main residence. The manufacturer commissioned the work to the architect Josep Puig i Cadafalch, who decided to give it the appearance of an urban Gothic mansion, with a flat façade and a central court with a staircase leading to the piano nobile. Puig i Cadafalch made a highly personal reading of the Neo-Gothic style in the Casa Amatller, through a design that allowed him to maintain the excellence of his work even at a time when the elements of Gothic language had been abandoned by most architects. The first outstanding feature in the building is its stepped Nordic façade, coated by a sgraffito membrane of ochre and white stucco and crowned by an extravagant Flemish-style gable adorned with red and gold vitrified Valencian tiles. The façade, considered by some specialists to be “the apotheosis of the decorative arts” and in which some have seen influences of the town houses of Copenhagen, Brussels and Amsterdam, has a bay window of Wagnerian inspiration that recalls the façade of the Sant Jordi Chapel in the Palau de la Generalitat (Plaça de Sant Jaume). Puig i Cadafalch sprinkled the house with his typical mediaeval details. The entrance, for example, is decorated with sculptures, capitals and stucco work such as the stone figure of Saint George killing the dragon by Eusebi Arnau. The figures on the windows of the main floor recall the fantastic and grotesque creatures that decorate Gothic mansions and churches. Also on the ground floor there is a jeweller’s shop that has respected the small original windows with floral ornamentation that are inspired by Catalan Gothic mansions. The foyer is decorated with three bronze lamps and has an elegant staircase leading to the piano nobile, which houses the Amatller Institute of Hispanic Art, founded by the Amatller family, an academic institution dedicated to the study of Spanish art that currently owns the building. The main floor is one of the few interiors of Barcelona that still conserve not only much of the original wealth of ornamentation, but also the opulent gilded atmosphere enjoyed by the bourgeoisie of the Modernista Eixample, thanks to the sculptures that adapt to the spaces, the floors of Roman-style mosaic and white marble, and the ceilings that offer a rich combination of polychrome beams and sgraffito work. The fireplace is one of the most outstanding features, though many consider that the masterpiece of this floor is the pink marble column located right in the middle of the bay window, which can be seen from the street -it plays no structural role, but is merely a hedonistic feature, only intended to offer the pure pleasure of contemplation, and you can see several pieces of the original furniture at the MNAC (34).

Restoration of the façade and foyer.
Alterations to the former coach house and the porter’s lodge to house the Centre del Modernisme and an exhibition hall.
Replacement of ceramic tile work on façade. Cleaning and maintenance. 2008

Discount of the Modernisme Route:  20% off the adult price.