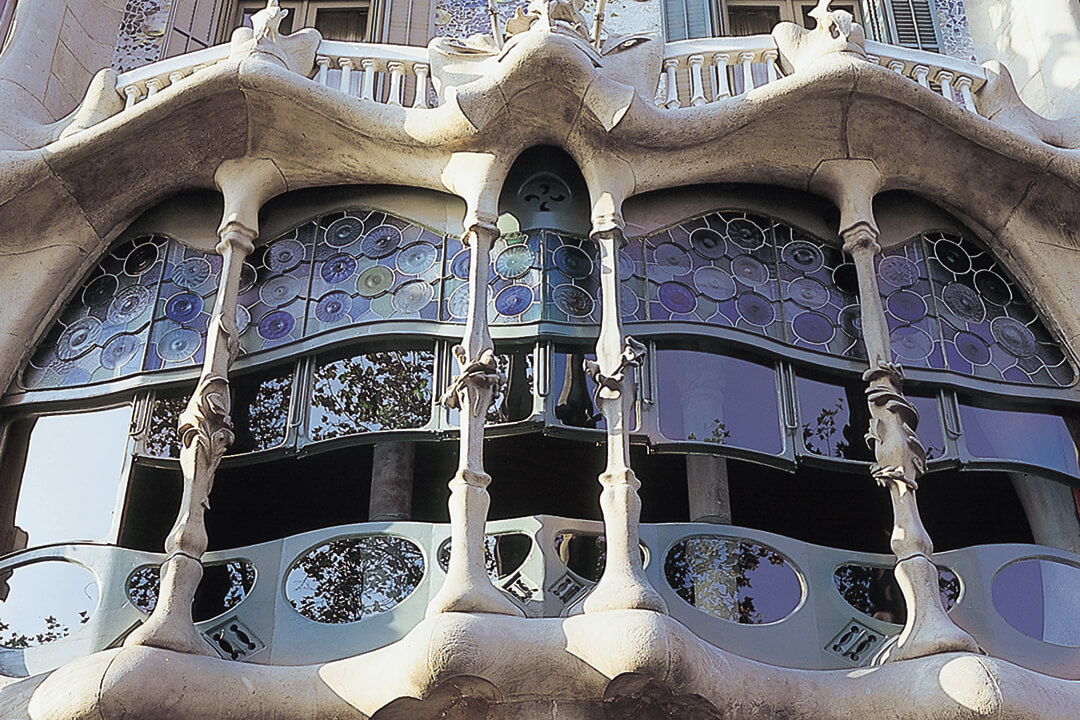 Josep Batlló was an ostentatious textile tycoon who owned several factories, one of them the old Vapor Batlló on Carrer Urgell, which is now the Industrial School of Barcelona. In 1904 he commissioned Antoni Gaudí to remodel an original building dating from 1870, and his fabulous riches allowed the architect to set his imagination free -indeed, Gaudí reportedly declared his intention to create “a paradise on earth”. He added a fifth floor, built the basement, extended the foyer, rebuilt the staircase and interior walls, and used wide curves in all the rooms. In fact, the building has no right angles. But the most singular element of the house is the façade, which combines stone on the ground floor and the piano nobile with a mosaic facing on the higher floors, and is crowned with a scaly tiled roof that recalls a reptile’s back. The interpretation of the façade has long been a source of dispute. For some, Gaudí’s aim was to build a symbolic hymn of the legend of Saint George, the patron saint of Catalonia, in his mythological victory over the dragon. If the roof is the dragon’s back and the circular tower symbolises Saint George’s lance, the iron balconies of the intermediate floors represent the skulls of the dragon’s victims, and the bay window on the first floor simulates the bones and tendons left over after the dragon’s feasts. However, another interpretation of Casa Batlló is that the whole façade is an allegory of Carnival. Then the roof would be a harlequin’s hat, the balconies would clearly represent ball masks, and the multicolour trencadís ceramic which “cascades” down the façade -the work of a young Josep Maria Jujol- would be the confetti of the feast. The inside is even more spectacular than the façade. The light well of the Casa Batlló is a true marvel. Always obsessed by lighting, Gaudí gave it an irregular facing of tiles that become darker, going from pearl grey to cobalt blue, as they go up toward the skylight. The result of this almost subliminal architectural device is an equal distribution of natural lighting on all floors. To complete the effect, the balconies and windows of the lower floors are larger than those on the upper floors. The staircase leading to the main floor is wrung like the skeleton of a fossilised dinosaur and the sinuous walls, painted to resemble a mosaic, have a surface and reflections resembling a cave eroded by the sea. The main floor is exceptionally well-preserved. The counterweights that are used to raise the stained glass windows giving onto Passeig de Gràcia are still fully operative, as are the grilles that provide air from the street -a brilliant natural ventilation system- and the precise hand-made window and door fastenings. On this floor, however, there are only two original pieces of furniture designed by Gaudí, a desk and a bench, but other designs by Gaudí for Casa Batlló may be seen at the MNAC (34).

Discount of the Modernisme Route

We ensure the accessibility of the house.