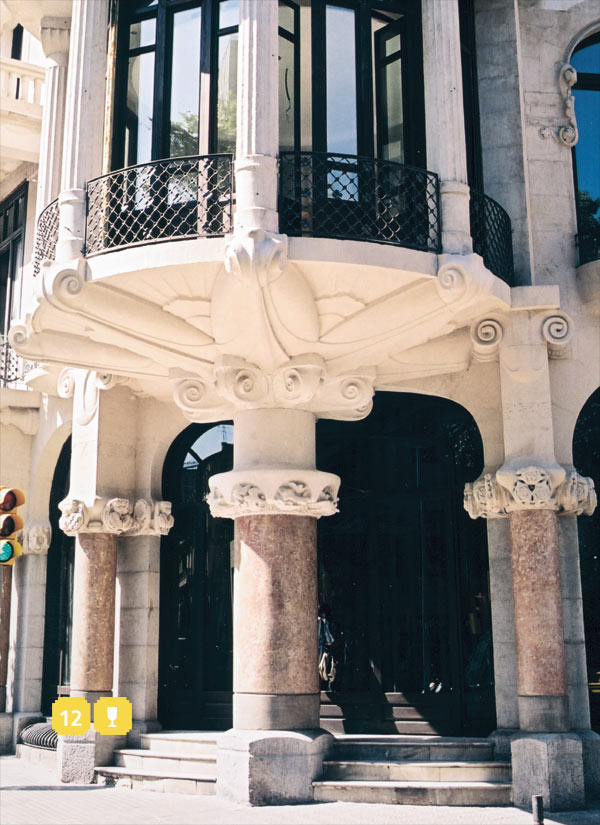 Domènech i Montaner’s last work in Barcelona (1908-1911). This building marks the end of Passeig de Gràcia and to some extent summarises the work of Lluís Domènech i Montaner. The façade has a cylindrical tower typical of the architect, adorned with sculptures that simulate swallows’ nests, and a curious French-style attic which is not very common in Modernista architecture. The building should have been crowned with a tower similar to that of the administration pavilion of the Hospital de Sant Pau, but it was never completed. For many years, the mythical Cafè Vienès wich occupied the ground floor, together with the dance hall El Danubio in the basement, was one of the main meeting points of the city. In 2004 the company Hoteles Center reopened the Cafè Vienès, after buying the house and fully restoring it into a luxury hotel (for further information see Let’s Go Out, the guide to Modernista bars and restaurants).

This hotel occupies the last urban house designed by the architect Domènech i Montaner, Casa Fuster (1908-1911), which was commissioned by Consol Fabra and Mariano Fuster i Fuster. It is located right at the end of Passeig de Gràcia, in the area known as “Els Jardinets”, a connection point with the old town of Gràcia. The owners wished to build themselves a new house here on the site formerly occupied by the Juncosa Chocolate Factory.Though the new building was constructed using the Modernista language, it shows a certain reserve and a more austere approach in the ornamentation. All the decorative elements of the different openings and of the capitals offer a certain schematisation in the vegetable motifs and a show clear tendency towards straighter and more geometric lines.

On the two main facades the architect continued to use Neo-Gothic and floral elements, but on the facade giving onto Carrer Gràcia, Domènech used an exposed metal structure and austere elements in the decoration, which are closer to his earliest architectural works.

The corner is accentuated by the full-height cylindrical volume, which may recall some other works by Domènech i Montaner such as the Hospital de Sant Pau and the Casa Lleó Morera, but in this case it is used as an abstract element. For many years the building was occupied by dwellings, until it was bought by the company Enher in 1962 with the idea of demolishing it and building a new building to house its offices. Thanks to public opinion and several anonymous articles that appeared in the press, the building was saved and in 1978 rehabilitation work began to adapt it to its new use and restore the exterior.

In 2000 Hoteles Center bought the building with the intention of opening it to the city once more, in this case as a hotel, after a long and expensive rehabilitation carried out by the firm GCA, with the architects Juanpere and Riu. In the whole restoration process the original elements of the house were respected (vaults, columns and ornamentation) and in fact the decoration work enhances and gives new value to the spaces of the building. Thanks to this great effort it has been classified as a five-star monumental luxury hotel.

On the ground floor is the entrance hall with the hotel reception and the Cafè Vienès, both of which offer free access and have a select atmosphere, in accordance with a five-star hotel. The Cafè Vienès—named after the café that was located on the same site, which was very popular in the 1940s as a place for literary gatherings and was frequented by intellectuals such as the poet Salvador Espriu—is an open space that allows one to see the columns supporting vaults painted with gold leaf. In this café, with gentle ambient music, you can enjoy a good cup of coffee or a drink in an atmosphere that is at once welcoming and sophisticated, due to the presence of Modernista motifs combined with the bold modern style of the sofas and tables that separate the spaces.

On the ground floor the hotel also offers four "Art Nouveau rooms” for meetings or presentations with a capacity of 6 to 10 persons. The largest one, the Sala Fuster, receives natural light from an inner court of the building.

The basement of the building, which formerly housed a ballroom called "El Danubio Azul", has been converted into the Domènech i Montaner Functions Room. This room is just below the Cafè Vienès and has a similar structure—an open, atmospheric space broken only by the columns that are enhanced by a floor of black mosaic arranged in a circular design. It has a capacity for 160 persons, and though it is used to serve the breakfast of the hotel guests, it can be booked for different events: weddings, cocktail parties or any other type of gathering.

Finally, the piano nobile houses the hotel's restaurant called Galaxó, a name that refers to the hill on which Mariano Fuster had a house on Majorca. It has views over Passeig de Gràcia, and the tables are arranged in three areas separated only by stone arches, which create privacy whilst maintaining the sensation of openness. An outstanding feature is the ceiling that, as a reference to the vaults of several rooms in the building, has been lined with undulating forms decorated with tin leaf. The restaurant has a capacity for 40 persons, and is open to persons who are not hotel guests if they book in advance. It offers elaborate and exquisite cutting-edge Mediterranean cuisine, with fresh, top-quality products in line with the general character of the hotel.

Rehabilitation of the building for use as a hotel.