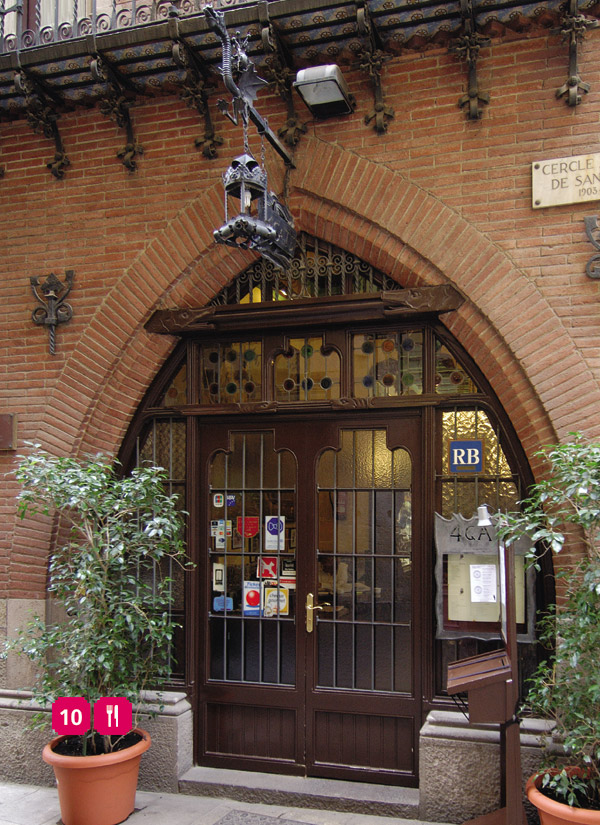 Casa Martí, by Josep Puig i Cadafalch in 1896, houses the bar-restaurant Els Quatre Gats founded by Pere Romeu and Miquel Utrillo, which remained open in this first lapse only until 1903. The interior of the establishment reveals the Neo-Gothic style of the building and the attempt to recreate a characteristically Catalan rural space with the ceramic decoration and floral and geometric forms, the stone frames and the different elements of wrought-iron.

For further information see Let’s Go Out, the guide to Modernista bars and restaurants). This old bar was one of the artistic and cultural centres of the late 19th and early 20th century Barcelona. Ramon Casas, Santiago Rusiñol and Pablo Picasso are some of the illustrious characters who dined, drank and held their artistic gatherings in this unusual bar, which opened in 1897 on the ground floor of the Neo-Gothic CASA MARTÍ by Josep Puig i Cadafalch (1896). The building, which looks more European than Catalan in style, features large Gothic-style stained glass windows, a curious decoration on the windows and a Flamboyant-style balcony. The exterior also features sculptures by Eusebi Arnau, wrought iron work by Manuel Ballarín and -in the niche on the corner-Llimona’s sculpture of Saint Joseph. What you see now is a replica installed by the City Council in 2000: the original was destroyed during the Spanish Civil War. The inside is no less impressive. Ramon Casas paid for the circular chandeliers and the medieval furniture designed by Puig i Cadafalch. Another of his “gifts” was the painting depicting two men, Pere Romeu, the owner of the bar, and the artist himself riding a tandem; the one currently on display in the establishment is a copy, the original is in the MNAC museum (number (34) of the Route). The establishment, which even published its own magazine named Pèl i Ploma (Hair and Quill), became the haven of artists and intellectuals such as the composers Enric Granados and Isaac Albéniz, and the young painters Joaquim Mir and Pablo Picasso. Unfortunately, the building has not been fully preserved. The original lintel of the door, by Puig i Cadafalch, disappeared in one of the many changes that the premises have undergone in its more than a hundred years of history. The premises currently house a bar-restaurant specialising in fresh, international cuisine and headed by chef Simon Tomàs. The current owners continue to host artistic activities in memory of the property’s origins. Dinner service each evening is accompanied by live piano music (from 9am to 9pm in the interior dining room) and if things become lively, diners may even have the chance to witness spontaneous artistic performances. In addition, on Tuesday nights at 9.45pm the stage at the 4 Gats becomes the meeting point for jazz lovers, with performances by the musicians of the 4 Jazz Trio recalling the spirit of the jam sessions in the 1930s.

The bar-restaurant Els Quatre Gats is located on the ground floor of Casa Martí, the first building designed by Josep Puig i Cadafalch in 1896. The building is in a clearly Neo-Medieval or Neo-Gothic style, as can be seen in the pointed arches and the ornamental design on the openings, but it is also undeniably Modernista in the use of several applied arts such as wrought-iron and ceramics in the interior.

The Taverna dels Quatre Gats, the name with which it opened in the summer of 1897, aroused the curiosity of the public from the very beginning. Their attention was drawn by the atmosphere of an old Catalan mansion created by the selection of decorative elements including walnut furniture, a counter covered with traditional Catalan tiles and simply decorated wooden beams, all combined with wrought-iron fittings and stained glass windows that—as stated in the newspapers of the time—gave “an artistic air to the establishment”.

The founders were Pere Romeu and Miquel Utrillo, men of their time who managed to create the environment that they had seen in Paris, thus attracting to their establishment artists such as Casas, Rusiñol and Picasso (who held his first exhibition of drawings in this tavern) and musicians such as Albéniz and Morera. The presence of these personalities in addition to the activities that were carried out in the inner room, such as performances of Chinese shadows, marionettes and cultural gatherings, gave the establishment great fame as a bohemian bar and meeting place for artists, a connotation that has continued to the present.

In fact, the beer hall was only open for six years: in 1903 it closed and was converted into a textile store. It was not until 1988 that it reopened as a bar-restaurant. Also, surprising as it may seem, the interior was recovered because the decorative details had been conserved intact. The Ferré family undertook the recovery of the premises and brought back Els Quatre Gats to the collective memory of Barcelona. Today the establishment is run by Josep Maria Ferré and his son Ivan Ferré.

Els Quatre Gats has two differentiated spaces. The first, as one enters, is the cafeteria-bar area, where the tavern was formerly located and most of the original decoration is concentrated. The second room, today the restaurant area but originally the room for performances and exhibitions, has been redecorated by applying motifs in the Modernista style, especially on the ceiling, though some elements from the time when this space was used as a textile store have also been conserved.

In the bar area the tiled wainscot, the stone door frames and the original bar covered with tiles depicting floral and geometric elements have been conserved. Only a wood partition separating the entrance and the bar that can be seen in an old photograph displayed inside the establishment has disappeared. The decoration is completed with reproductions of works by Ramon Casas, Santiago Rusiñol and Pablo Picasso.

The establishment is currently a bar-restaurant specialising in fresh market produce and international cuisine, under the direction of the chef Antonio Cabanas. From time to time, according to the season, the restaurant also organises a Culinary Week dedicated to a particular country. Recalling the origins of the bar, the current owners also maintain a certain amount of artistic activity. Every night the dinner is accompanied by live piano music (from 9 p.m. to 1 a.m. in the inner room) and also, if the evening is lively, some musician may give an impromptu performance. Furthermore, every day the establishment publishes the newssheet 4 Gats. Diari d'Art i Cultura amb Menú Gastronòmic, which contains the day's menu and several stories and opinions. These activities, which can be consulted on the bar's web page, are completed with the “Jove Valor” (Young Talent) project, which helps to promote young artists and creators. If you wish to know more about the establishment or take away a souvenir, you can buy objects such as coffee sets, T-shirts, the Centenary Book and some cookery books.