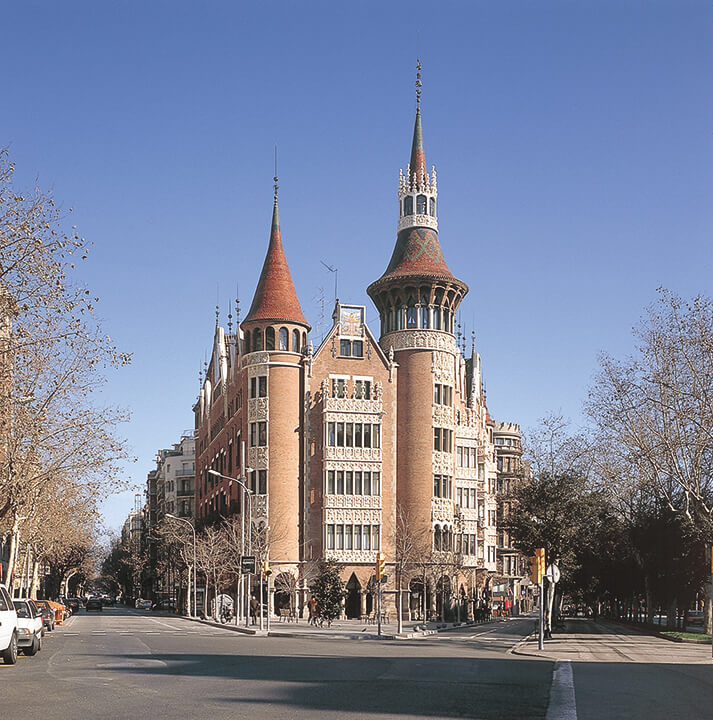 This imposing building, known popularly as CASA DE LES PUNXES, (HOUSE OF THE SPIRES), was built in 1905 by Josep Puig i Cadafalch on a large site owned by the Terrades sisters. With a striking and characteristic silhouette, Casa de les Punxes is one of the most famous Modernista works. Though it seems to be a uniform block, it is in fact composed of three apartment houses. In its construction, Puig i Cadafalch exaggerated his highly stylised traditional medieval elements to the point that the building looks like a castle. It has four round towers crowned by conical turrets, a main tower with a dome and a host of bay windows and belvederes in Flamboyant Gothic style. The Australian writer Robert Hughes described it in his book Barcelona as “a cross between a Flemish guildhall and a medievalising Mad Ludwig (referring to Louis 2nd, King of Bavaria) schloss”. Its spectacular façade is clad in brick, except on the ground floor where stone is used, and it features wrought iron work, balconies and ceramic panels depicting patriotic motifs. One of these, the largest and best-known, represents Saint George and proudly bears the following legend: “Sant Patró de Catalunya, torneu-nos la llibertat” (“Holy Patron of Catalonia, give us back our freedom”) which at the time was considered by some to be a provocation. The fiery politician Alejandro Lerroux called it “a crime against the nation” (the Spanish nation, in this case), but art prevailed over politics and the panel was preserved -even during fascism and with a police station in front of it!.

Restoration of façades.
Recovery, strengthening and maintenance of ceramic tiles on domes. 2011 - 2012