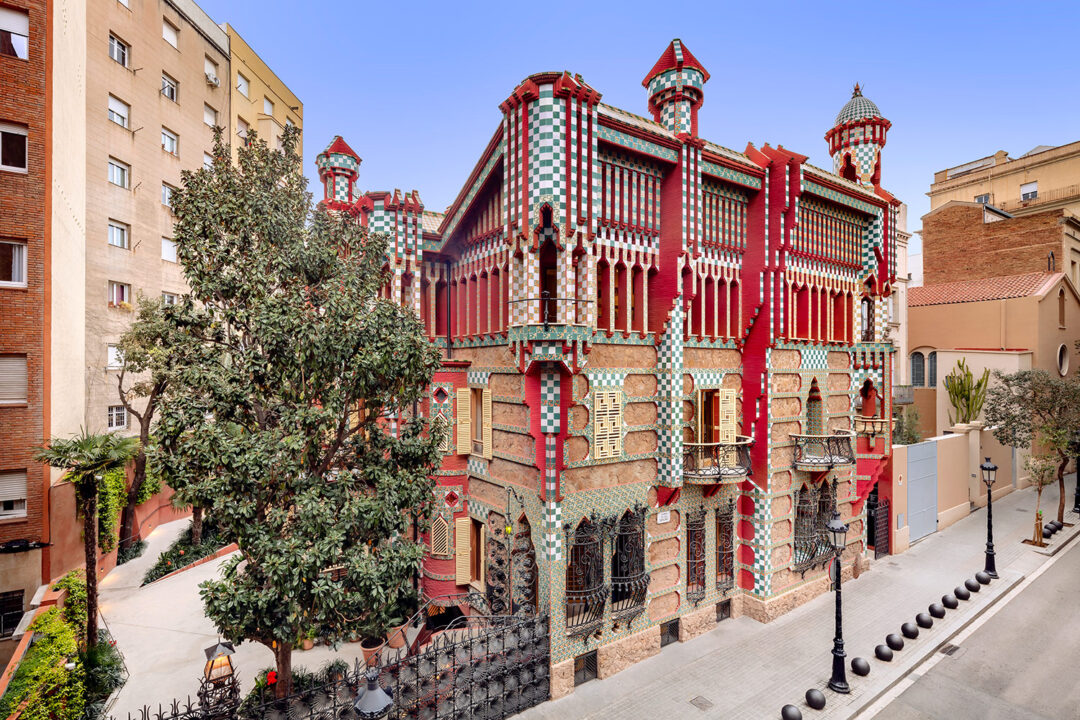 This early work by Gaudí was built between 1883 and 1885 and commissioned by the stockbroker and currency dealer Manuel Vicens as a private residence in the old town of Gràcia. It was Gaudí’s first building in Barcelona and in it he managed to display his great talents as an architect.
Gaudí was already showing his main source of inspiration in this building: nature. This is the why its external tiles bear the images of carnations, the yellow flower that Gaudí found when he arrived at the site. Similarly, the home’s iron gate reproduced the attractive leaves of the fan palm, a small tree that is native to Catalonia. Gaudí’s primary goal in the house was for nature to enter the rooms, which is why it contains constant representations in its trompe-l’oeil, ceilings and sgraffito work.
Casa Vicens reveals Gaudí’s many oriental influences in his early period, but it also reflects the traditions of Catalan construction. The smoking room, with its papier-mâché tiles, dining room and layout of the bedrooms are all outstanding elements.
Casa Vicens opened its doors to the public in autumn 2017 after two years of rehabilitation and restoration of Gaudí’s work. This World Heritage building is an essential cultural visit for all those interested in learning about the beginnings of Gaudí’s architecture.

Restoration of façade, roof and gallery.
Restoration of the façade, bay window and patio (original tiles, sgraffito work and woodwork) and recovery of the bench-balustrade of the bay window.

For visits after hours you can write to us at reserves@casavicens.org

Audio guide included with the ticket. Accessible tour for people with people with reduced mobility. Equipment with Biosphere certification of sustainability.