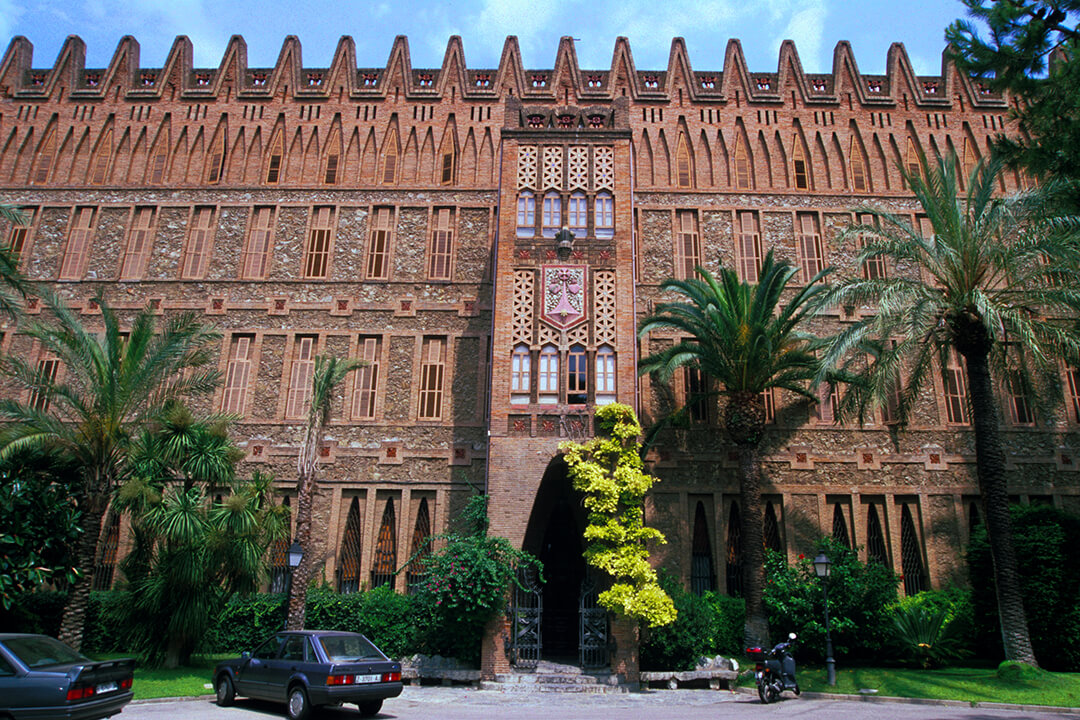 Gaudí was commissioned to build this spiritual fortress of Saint Theresa. To carry out the commission, Gaudí read the mystical works of the Catholic saint, and it shows. The symbolism of Saint Theresa is everywhere, as in the T-shaped columns at the end of the cloister corridor. In the centre of the ‘fortress’ there is another column, but it is very simple, because Gaudí imagined that the centre was God’s place and he considered that he could not pretend to create anything to match such absolute beauty. The entrance door is also full of religious details, such as the initials of Jesus, although there are also patriotic references in the wrought-iron four-striped Catalan flag. The characteristic Gothic arches of the building represent the symbol of prayer: the parabolic arches on the façades of the building (windows and ornamental motifs) are continued inside. In the corridors of the first floor, the rhythmic presence of these arches generates an interplay of light and shade that enhances the space giving it the feeling of a convent cloister. Gaudí even designed the plant pots, which had to be orange and green in colour. Orange as the symbol of the Holy Trinity, in which yellow is the Father, red the Son and orange, the mixture, is the Holy Spirit. At the corners of the building Gaudí built helicoidal brick pillars with the coat of arms of the Theresian religious order in ceramic, crowned with four-armed crosses. Another interesting element is the chimney, similar to those in Palau Güell, that presides over the roof terrace of the building. In 2002 the Barcelona Urban Landscape Institute recovered elements and emblems of the façade, and replaced the peculiar “birretas” which had disappeared during the Spanish Civil War -University doctoral caps, yat another sybol of Saint Theresa- back on the roof battlements.

Restoration of various special elements of the crown, coats of arms on the façade and capstones on the battlements.