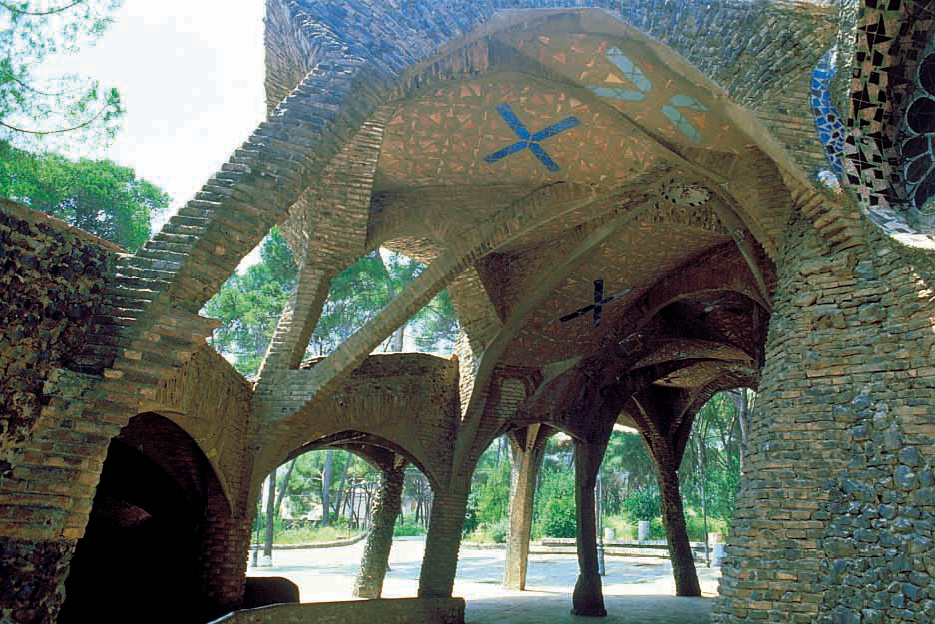 Colònia Güell is a former mill village founded in 1890 by the bourgeois businessman and patron Eusebi Güell in Santa Coloma de Cervelló. The village was conceived, starting with the textile factory, as an urban unit of dwellings and facilities for the workers (houses, school, church, shop, club, etc.). The aim was to achieve social peace in an environment controlled by the factory owner. Colònia Güell, however, differs from other mill villages in its use of the steam engine (rather than a river) as the source of power, the separation of the factory from the residential area and the fact that it was designed by leading Modernista architects. To carry out this project Eusebi Güell hired Antoni Gaudí, Francesc Berenguer i Mestres and Joan Rubió i Bellvé. The latter two, prestigious Modernista architects and collaborators of Gaudí, were responsible for the town planning and some of the most outstanding buildings (Ca l’Ordal, Ca l’Espinal, l’Escola, Casa del Mestre, or Centre de Sant Lluís), in which they made an impressive display of the most purely Modernista architectural and decorative resources. Gaudí, on the other hand, designed the church which is popularly known as the “crypt”, since only the ground floor and the portico were actually built, whereas according to the original project it was supposed to have two floors and rise 40 metres tall.

A set of Modernista buildings

Colònia Güell consists of the factory (which today houses several different firms and is in the process of being renovated), the urban centre and the church. In the Visitor’s Reception Centre there is an introductory exhibition to the tour. In addition to visiting the church -with or without a guide- you can also have a guided tour of the whole village to immerse yourself in the social and creative atmosphere that existed at the start of the 20th century. After this you may like to go for a gentle stroll through the pine woods surrounding the church and feel the peace impregnating the area.

The Colònia Güell church crypt is regarded by many as Gaudí’s masterwork. It was here that he experimented with, and succeeded in expressing, his most personal architectural language. He decided to use a system of inclined columns to bear the weight of the building without the need for buttresses or flying buttresses. He calculated the distribution of weights using a polyfunicular scale model, a method he invented for architectural design which made it possible, on a small scale, to foresee the loads and the arches that were needed to bear them. In 1969 the church was classified as a historical and artistic monument and today it is considered one of the essential pieces of 20th Century architecture in view of the major innovation consisting of the use of inclined columns and vaults in the shape of hyperbolic paraboloids and on account of the wonderful combination of materials.

Gaudí chose as the site for the church the highest hill in the residential part of the village amid a pine forest. As a result of the local materials used, the church and the inclined columns of the portico blend in visually with the surrounding countryside in perfect imitation of it. The walls and outer columns make use of a far-from-whimsical combination of different materials: cast iron slag, misshapen baked bricks, calcite stone and basalt. On the outer walls there is a great profusion of mosaics with religious symbols. The portico features an impressive basalt palm tree supporting the vaults. It was in the atrium of the porch that for the first time in history Gaudí experimented with hyperbolic paroboloid vaults. There is an extraordinary mosaic on the lintel of the main door.

Inside the oval ground plan crypt, the main features are the solution to the ceiling, based on brick ribs, the hyperbolic paraboloid walls and the four basalt columns which have a prehistoric air about them. All this atmosphere (it must be remembered that the church was never finished) is in sharp contrast to the colours of the stained glass windows. The pews and the holy water fonts, made with enormous shell shapes supported by wrought iron, were designed by Gaudí. The shrine, the altar of the Holy Family and the angels of the presbytery are by Josep M. Jujol.

Work on restoring the church, which is being carried out in several stages, has been in progress since September 1999. The aims of the restoration are:

- To recover the original value of the work of Antoni Gaudí, rigorously preserving the original work while eliminating the elements added after he withdrew from it.

- To finish off the work that was left incomplete, giving it a formal finish by crowning the outer wall with a material clearly differentiated from the original.

- To give the building a functional finish by improving access with a new entrance axis and new outside stairs up to the terrace roof that is the result of replacing the old, dilapidated, temporary fibrocement roof.

- To reverse the deterioration caused by the passage of time by cleaning the building, weatherproofing the ceilings and restoring the mosaics and other deteriorated items.

So far the atrium, the porches, the outside walls and the mosaics have been restored. The floor of the entrance and the floor under the porches have been renewed. The unfinished ramp which was designed to provide access to the upper nave that was never built has been restored. A new terrace roof and outside staircase have been built. The exterior lighting of the church has also been installed. The most important jobs remaining to be done are restoration of the inside of the building and improving the church’s surroundings with larger grounds.

Saturdays, Sundays and public holidays, from 10am to 3 pm.

Groups by prior reservation. We guarantee that there will be no contact between groups.
Visit with audio guide

Winter opening times, from November to April:
Monday to Friday, from 10 a.m. to 5 p.m.
Saturdaus, Sundays and public holidays, from 10a.m. to 3p.m.

Visiting is not permitted while religious services are being held (Sundays from 11 a.m. to 1 p.m., and occasionally on Saturday morning).If you wish to visit at the weekend, please phone first to confirm opening times.

Guided tour of the Colonia Güell + church (2 hours) + entrance to the permanent exhibition: €12 per person.

Guided tour of the church (1 hour) + entrance to the permanent exhibition: €10 per person.

Guided tour of the Colonia Güell (1 hour) + entrance to the permanent exhibition: €10 per person.

Visit with audio guide of the Colònia Güell and Cripta Gaudí: € 9.5 per person.

Visit with audio guide of the Colònia Güell and Cripta Gaudí: € 7.50 per person.

Discount of the Modernisme Route: 20% discount on audioguia ticket.


There is an introductory exhibition at the Information Centre.