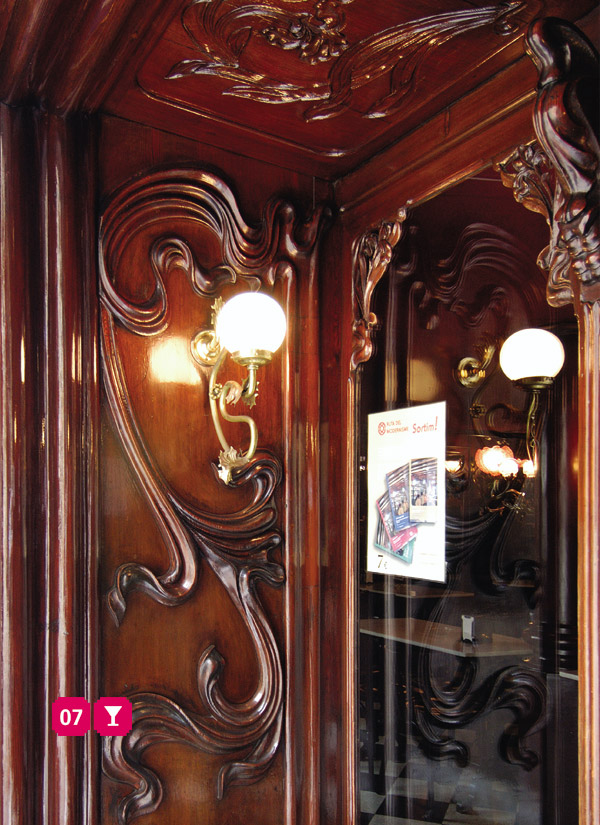 El Paraigua is an example of a bar that was not originally Modernista but was decorated using original elements from the period. It was opened in 1968 after being fitted out with the decoration of an entire Modernista shop founded at the beginning of the 20th century. This shop, called Gallés, sold umbrellas and fans and was located at Carrer dels Arcs number 5 until it was decided to demolish the building in 1967 and the business had to be moved. Little information is available on this shop. It was founded in 1902 but neither the owners nor the decorators are known: a photograph of the old façade can be seen on this page.In 1966 the owner of the shop sold the decoration to the decorator and theatrical designer Josep M. Espada. All the ornamentals elements were dismounted piece by piece and Espada used them to create a new design by adapting them to smaller premises, near Plaça Sant Jaume, which were to be converted into a bar. The Yagüe brothers were contracted to restore all the boxwood elements and adapt them structurally to the new space.

Before one enters the establishment, the first thing that strikes the attention is the front door. The panels of the lintels were formerly the umbrella shop sign (if you look closely you can even see the street number of the shop marked in the wood). In other parts of the establishment, and especially on the glass partitions, a repeated motif reminds one of the origins of the decoration: two umbrellas and a fan.

All the Modernista decoration is located from the bar to the ceiling in the first space of the establishment, on the ground floor, including the lamps and wall lights. The lower part of the bar was made using the wooden panels from the top of the umbrella display cabinets. The ceiling was decorated with the sliding doors that covered the display shelves for the fans. Other features of the former shop are the wainscot on the walls, which in this case served a similar purpose in the original establishment, and all the frames of the mirrors covering the walls of the bar. Thus, this very small establishment (particularly in height) was redecorated with the decoration taken out of the original shop. This is why the motifs are repeated on different parts of the walls and doors, because the pieces were placed according to their size in order to make as few modifications as possible.

In most of the elements two ornamental motifs are repeated: a decoration of undulating lines finished at the ends with floral motifs, and a more naturalistic decoration with interlaced flowers and leaves. In the lighting, original Modernista lamps are combined with wall lights some of which designed by Espada in the 1960s.

The new bar El Paraigua was opened on 5 April 1968, and its founders, in addition to Josep M. Espada, were J.M. Segarra and E. Vila Casa. In 1969 J.M. Sánchez, an Andalusian from Cádiz who had arrived in Barcelona three years earlier, began to work in the bar: in 1972 he became a partner and from 1995 to the present he has been the sole owner, together with his wife Sebastiana Guerrero.

In the 1980s it was decided to extend the premises by fitting out a basement with medieval vaults (it seems to have been the cellar of a former monastery) to house an elegant cocktail bar that offers select classical music. El Paraigua is a quiet place to visit at any time of day for a coffee or a good cocktail, of which it offers some fifty, with and without alcohol. These include, for example, El Paraigua, a semi-cocktail made with cava, tequila, drambuie and lemon, orange, pineapple, peach and blackcurrant juice. For those who are not experts in cocktails it is best to take the advice of the highly professional barman, who will find the most suitable cocktail for any situation or time of day.

Though cocktails are the speciality, El Paraigua also offers a wide range of wines, cavas and liqueurs. One can also have something to eat at any time of day, with an assortment of local dishes that are simple but of excellent quality, ranging from potato omelette to cured chorizo and appetizers that can be selected at the bar. The set menus composed of the selection of tapas cost between 35 and 40€ on average, including a drink, dessert and coffee.

El Paraigua is also open to cultural activity: the basement often displays exhibitions of paintings, and every Monday evening cultural gatherings are held there (you can consult the programme on the web page). The establishment is open to other cultural and social activities, or small private celebrations: for further details contact the management.