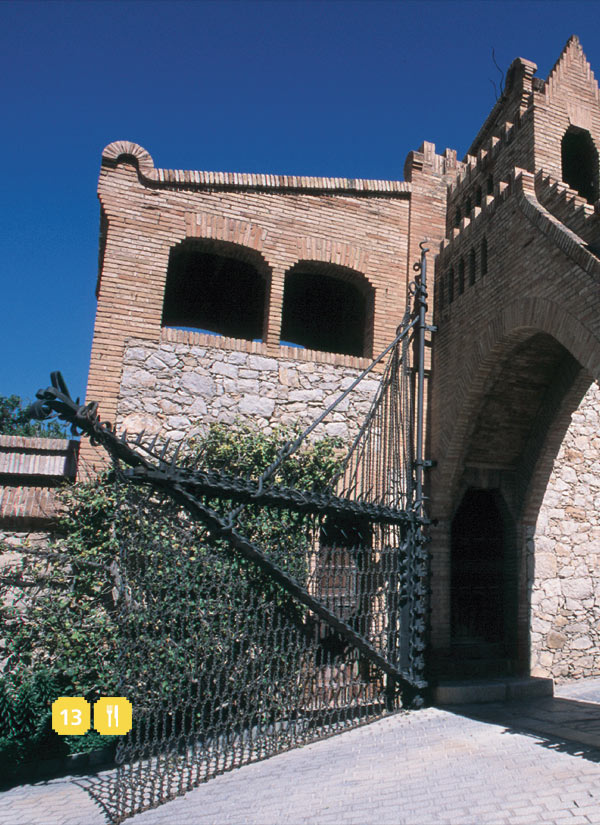 The restaurant Gaudí Garraf is located in the well-known Celler Güell, a complex of buildings on which the architect Antoni Gaudí may have worked.In 1882 Eusebi Güell commissioned Gaudí to design a hunting lodge on some land he owned in the area of the Garraf. This project never saw the light of day, but later, in 1895, a cellar was built there following a design that was probably by Gaudí in collaboration with Francesc Berenguer, to whom the building was attributed for many years.

The cellar, built in local stone, is a unique triangular building based on the Gaudinian parabolic arch. The walls act as a roof, and the building consists of two lower and three upper floors, including a private chapel. The exterior has a notably mediaeval look, although the architect’s hallmark of naturalistic elements is visible in the chimneys, as is the monogram of the Güell family on the walls.

Forming part of the same project, the gatehouse is also built in stone and brickwork, and again we find the monogram of the Güells. The main gate, in meshed ironwork, is of particular interest. On the same site there is a watchtower and alongside this a farmhouse, which are both private and closed to the public.

Since 1977 the complex of buildings has belonged to the Granada family, who bought it from the then Count Güell. The part built by Gaudí was used as a private house and the rest of the complex continued to be used to grow mushrooms, as it had been for many years. In 1994 the family turned the space into a restaurant: the two main halls, purpose-built as a mushroom farm, were converted into two rooms of the restaurant—the Granada Room and the Garraf Room—and the ground floor of the house became the Gaudí Room.
The Granada Room, which can seat up to 400 people, is on the first floor. The room is compartmented by semicircular arches that divide the space up into several aisles with arched brickwork ceilings, each containing rows of round tables. A staircase leads from this room to the lower level, which is occupied by the Garraf Room, with seating for 300. Here too the distribution is determined by pillars supporting small arches, and the decoration is more sober in style. These two rooms are used both as an à la carte restaurant and for large private celebrations, especially wedding banquets. Both also have private terraces for serving the apéritif independently. One of the two terraces—the Violin Terrace—is used in the summer to serve dinner, and affords sweeping views.

In addition to this building, with its characteristic industrial feel, just across the drive we come to the building designed by Gaudí, with a more artistic air. In the Gaudí Room, which has now been converted into a restaurant seating eighty persons, the architectural peculiarities have been conserved without adding any accessory elements. The most noteworthy features are the sharp triangular space in the interior and the shape of the windows and the main door. The upper floors are private and as such are not open to the public, although the chapel at the top of the building is always available for holding the wedding ceremony prior to the banquet.

The restaurant offers fine Mediterranean cuisine, which is only served à la carte but at reasonable prices equivalent to a weekend table d’hôte. The names of some of the dishes are references to the restaurant’s setting, such as the Gaudí salad. Also, in the Granada Room the char-grilled meats—one of the main dishes—are cooked over an open fire in full view, as a token of good faith to the customer.

Customers are given a warm welcome, as the whole establishment is run by the Granada family themselves, who aim to provide a pleasant, simple, unhurried location for gatherings in a unique architectural setting.