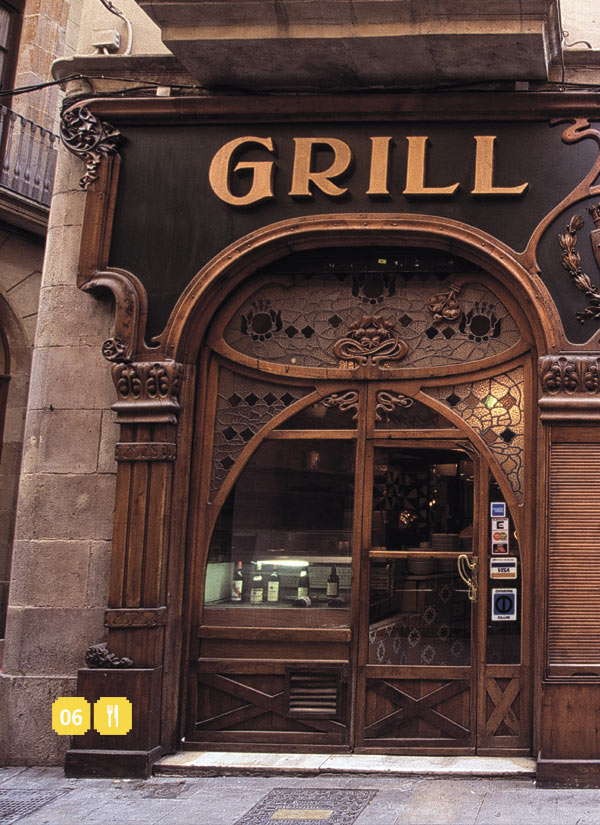 Formerly known as Petit Torino, this bar occupying the ground floor of a previous Vuitcentista building was decorated in Modernista style by Ricard Capmany around 1902. The façade is clad in wood and features a central window crowned by a shield depicting a raging bull, the symbol of the Vermut Torino company. An interesting feature of the doors is the glasswork at the top. In the interior the display cabinet of sinuous lines with natural motifs and the two counters, one completely plain and the other with applied ceramics, have been conserved. Other outstanding features are the cast iron pillars and the painted panelled ceiling in the first section of the premises.

In 1902, a man from Turin called Flaminio Mezzalama opened two cafés in Barcelona: one on the new boulevard of the local bourgeoisie, Passeig de Gràcia, and the other in the former bourgeois town centre (which was then gradually becoming degraded), in Carrer Escudellers. Mezzalama was a representative of the entrepreneurs Martini and Rossi, and he introduced Italian vermouth to Catalonia. We also know that he was a very active entrepreneur in the civil society of Barcelona: in 1908 he was a member of the Industrial and Commercial Defence League.

The café at Passeig de Gràcia number 18, which no longer exists, was called the Café Torino and in the year of its opening in 1902 it won the prize of the City Council for the best establishment. The second café, which is the one described here, is still today situated at Carrer Escudellers number 8, and seems to have been called the Petit Torino, though the early 20th century guides call it the Café Torino. Both cafés were decorated by Ricard Capmany, though the decoration of Carrer Escudellers was more discreet than that of Passeig de Gràcia. Thanks to the report on the prize won by Café Torino, we know who collaborated in the decoration, and it can be assumed that the same team decorated the Petit Torino because of the similarity of the decoration and the proximity of the dates.

A few years later, in around 1910-1911, the Café Torino on Passeig de Gràcia closed and the one on Carrer Escudellers may also have done so, because in 1914, according to a guide of the city, the establishment was called the Oriental Bar and its owner was a certain Juan Alamán. Two years later, the establishment changed ownership once more and was given the name that has identified it since then. In the late 1920s, the Bofarull family, owners of the neighbouring restaurant Los Caracoles, acquired the Grill Room and are still the owner of the two establishments.

The Grill Room occupies the ground floor of an 18th-century building and its facade is decorated with a wood facing that adapts to the openings of the building. If one compares current images of the facade with images of its origins one can see the discreet changes that it has undergone. It still has the same wood facing with two large arcades divided by a pillar and a display window crowned by a shield with a raging bull. The upper part of the doors is occupied by fixed glazing. The main changes are the sign, which was originally painted and decorated with floral motifs and now consists of large linear letters on a green background, and the base of the display windows, which in the old images seems to have been clad in marble and is now clad in wood. The establishment stands at the corner of Passatge Escudellers, and in this street we find three arches that repeat the symbols of Torino Vermouth and the raging bull.

The interior decoration features a display cabinet that is located on the right as one enters, on which one can see the sinuous lines and floral decoration that were characteristic of the early 20th century. The establishment has asymmetric counters: the one on the right is completely smooth, without any type of decoration, whereas the one on the left is decorated with applied ceramics. The cast iron pillars are another outstanding feature: in the first of them one can still read the initials VT (Vermut Torino) framed by a raging bull, recalling the business of the founder. Other elements of interest are the painted panelling in the first section of the establishment and the iron wall lights.

The space is currently divided into two parts, one containing the bars where one can have a drink, and one built later as the dining room, where one can have an à la carte meal. The cuisine of the Grill Room, as its name suggests, is based especially on meat dishes and other grilled ingredients, though it also offers traditional dishes of Catalan cuisine and a more international cuisine. In the heart of Ciutat Vella, between La Rambla and Plaça de Sant Jaume, this restaurant has a cosmopolitan and varied environment, and like most establishments in this area, in recent years a large proportion of its clientele are tourists. The dining room, which has a capacity for 50 persons, may be reserved for celebrations or for group dinners, with the possibility of choosing a set menu from the dishes offered.

Restoration of exterior, interior and rear facades, and decorated floor panels on the first floor.