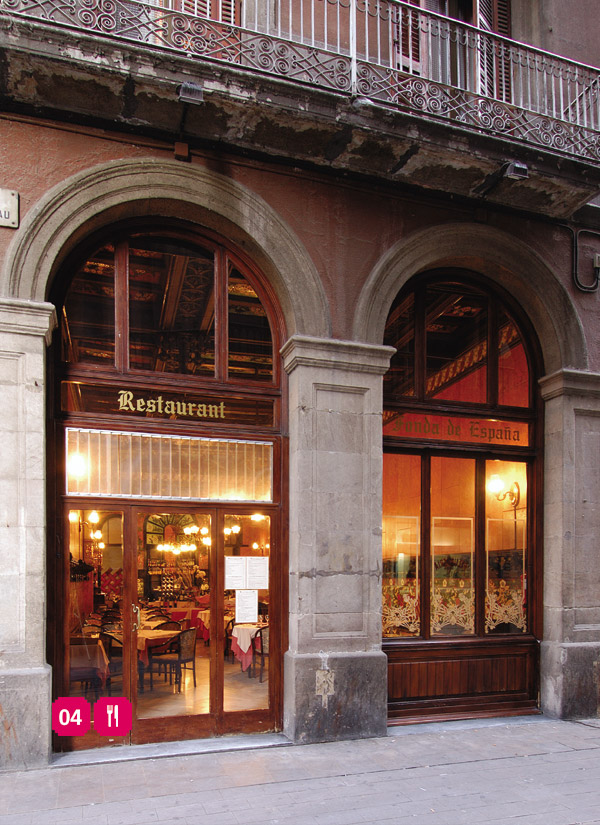 In 1903 the architect Domènech i Montaner was commissioned to decorate the Fonda Espanya, and his work won the City Council prize for the best establishment.
Inside some of the rooms have been conserved intact, with wood and ceramic wainscots with heraldic motifs, mural paintings of marine themes and other ornamental elements. One of the rooms features an alabaster fireplace made in 1901 by the sculptor Eusebi Arnau.

One of its oldest establishments. The main architectural interest of this hotel, which formerly accommodated the Philippine national hero José Rizal, lies in its public rooms, decorated in 1902-1903 by one of the fathers of Modernisme, Lluís Domènech i Montaner. In the Hotel España, Domènech i Montaner worked with two great masters of the plastic arts of the time: the sculptor Eusebi Arnau and the painter Ramon Casas. Eusebi Arnau made the splendid alabaster chimney in one of the dining rooms, which is visible from the street, and Ramon Casas did the marine sgraffito work in the interior dining room, which also features a coffered skylight that casts gentle lighting on Casas’s work. Domènech i Montaner completed the work with two ingenious wooden wainscots. One of them, of meticulous design, is decorated with blue tiles representing the Spanish provinces, whereas the other, of Roman type, depicts floral themes (for further information see Let’s Go Out, the guide to Modernista bars and restaurants). In 2010 the Cadarso Group, owner of the hotel, undertook a thorough rehabilitation of the premises with the architects Carlos Bassó and Tote Moreno, in conjunction with the interior designer Mercè Borrell. This renovation process has resulted in the new 82-room Hotel España and its Fonda España Restaurant, managed by the famous Basque chef Martin Berasategui.

the Fonda España, which is located at Carrer Sant Pau numbers 9 and 11, whose decoration was designed and supervised by the architect Lluís Domènech i Montaner. In this work conceived with powerful inspiration and extreme beauty, the aspects that stand out are of course the abundance and excellence of the artistic resources that combine severity and delicacy, grandiosity and dexterity, the skilful choice of materials, the pleasant harmony of the colours, the fine arrangement of the lines, the elegance of the forms and, above all, the firm talent with which an unpretentious work without exaggeration or violence has been executed.”

This is how the statistical yearbook of Barcelona City Council of 1904 describes this establishment, owned by Rius and Martí, which won the prize for the best established opened in 1903. And with few modifications, this is how we can see it and enjoy it at present.

The oldest reference that has been found on the Fonda España so far seems to indicate the date when it opened. It is an announcement in the Diari de Barcelona on 30 December 1858 informing that “on the first day of 1859 this establishment will open with everything new”. In 1863 the Fonda was extended to occupy the ground floor of a new building that the owner Josep Colomer had built beside it. Between this date and 1903 we have no references of work done on the interior of the establishment.
The heirs of Josep Colomer commissioned the decoration to Domènech i Montaner, though in 1903 the owners were already Rius and Martí. Since then it has always had the same business, but it has evolved over the years from a bar and inn to a restaurant and hotel. In the 1920s this establishment was popularly known as Els Toreros, because it was where many of the best-known bullfighters stayed. During the Civil War it was requisitioned by the CNT anarchist trade union for use as a hospital. In 1983 the hotel was acquired by the Tutusaus family, who recovered the decoration that in some areas was by covered by more modern works and the alabaster fireplace that had been painted black. (In October 2004 the company Hotelcon 96, SL. bought the hotel).

Not all of the decoration was preserved intact: the zone that suffered most is the reception: the original wooden door has been preserved but the rest of the interior shows little trace of the original decoration. On the left of the reception is the Arnau Room, which has also suffered many mutilations in the course of time. Previously a "rest room" and now a bar-restaurant, this room still has its splendid (gas-fired) alabaster fireplace, which was modelled in 1901 by the sculptor Eusebi Arnau and produced by the workshop of the sculptor Alfons Juyol i Bach. Careful attention should be paid to the rich sculptures representing the ages of man that depict figures of women and an old man, and the chimney breast crowned by the coats of arms of the emperor Charles V of Germany (also known as Charles I of Spain) with the imperial crown, the two-headed eagle, the columns of Hercules and the golden fleece, with the emblems of the kingdoms of Leon, Castile, Navarre and Aragon in the centre. These motifs are also found in the decoration of one of the dining rooms: the heraldic references are characteristic in the work of Domènech i Montaner, who, in addition to being an architect, historian and politician, was also a prominent expert in heraldry.

The decoration that merited the prize of the City Council for the best establishment can be seen in the two dining rooms, which are still used for the same purpose today. Crossing the reception from the street in a straight line, one comes to what was formerly the guest's dining room, also known as the Saló de les Sirenes (mermaid's room), which is now reserved for banquets and group dinners. The first thing that calls the attention is the mural painted on the wall with a marine theme: mermaids (with legs) and fishes of the Mediterranean, all set on a background of sea waves in relief. These paintings have often been attributed to the painter Ramon Casas.

Under the paintings, covering the lower part of the wall there is a wainscot formed by a lattice of wide wooden strips, with glazed tiles filling the empty spaces and depicting once more coats of arms of former nobility. The room is covered by a coffered skylight that provides gentle natural lighting.

The second dining room, which communicates with the first and is at the right of the reception, was—and still is—the public restaurant. In this room the wainscot is tiled, also representing emblems but fewer in number. The wooden coat hangers crowning the wainscot show a more detailed craftsmanship than in the first dining room, and are decorated with vegetable and floral motifs. All the wall lights and the hanging lights in this dining room are from the time of the conversion performed by Domènech i Montaner, though they were originally in the Arnau Room.

In all the rooms one can enjoy a set menu at a very reasonable prices at mid-day and in the evening, consisting mainly of Catalan cuisine but with the flexibility that is typical of a hotel. It is an establishment that is open to everyone, from the people who live and work in the neighbourhood to the guests who are staying in the hotel. Now, more than 100 years after the decoration of the Fonda Espanya, we can still have a meal there enjoying a privileged atmosphere and feel ourselves to be part of a world created by the grand master of Modernisme, Domènech i Montaner, in which he demonstrated the enormous possibilities of dialogue between stone, paint, ceramic, glass, iron and wood.

Guided tours:
Monday to Friday at 12.15pm and 4.30pm, and Saturdays at 5pm. Public holidays on prior request.

Start: reception area of the Hotel España (Sant Pau 9-11, next to El Liceu).