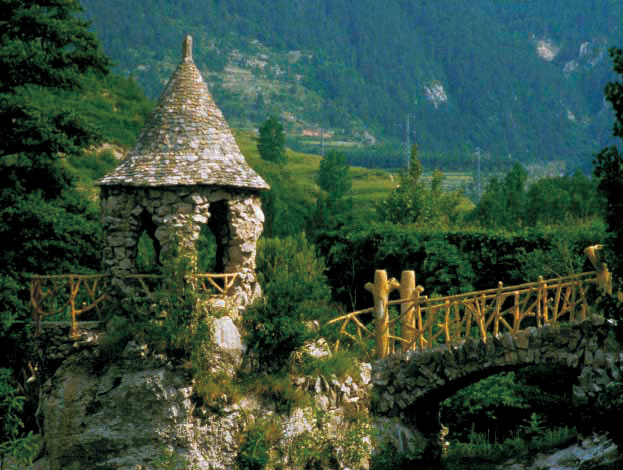 Gaudí designed the gardens known as Jardí de Can Artigas, together with a house-cum-refuge, in the nearby Serra del Catllaràs range in 1904. La Pobla de Lillet is a municipality in the comarca, or shire, of El Berguedà that has 1,558 inhabitants.

The garden, which is private property, was abandoned from 1939 to 1989. Because of this, and the fact that the terrain is not very accessible, it remained forgotten throughout this time. Besides, the lack of documents confirming that it had actually been designed by Gaudí meant that it was not taken into consideration as part of his work. In addition to this, the house known as Xalet de Catllaràs was renovated in the 1980s with questionable criteria that made it lose all its decorative features. However, in 1991 the Càtedra Gaudí (Gaudí Chair, a univeristy research centre) began researching the two works and then tackled the project of renovating the gardens. The Chair has reconstructed a plausible hypothesis according to which it was Gaudí who designed the gardens and this has helped to make it one of the most visited points of architectural and artistic interest in El Berguedà.

A commission from Eusebi Güell

Although aesthetically there appear to be certain similarities with Park Güell, Jardins Artigas, as they are today, are the only humid gardens designed by the eminent architect.
At the beginning of the 20th century, the first company producing Portland cement in Spain was set up in Clot del Moro (Castellar de N’Hug). This company, Asland, was headed by the businessman Eusebi Güell i Bacigalupi. As the factory was being built (1901-1904), various service industries grew up around it, such as the coal mines in Serra del Catllaràs to feed the Asland cement furnaces. Count Güell commissioned Gaudí to design a house in Catllaràs for the engineers and professionals in charge of managing and running the coal mines.

In order to visit the place where the house was to be put up, Antoni Gaudí went to stay with the Artigas family who were in the textile business. During the two days he spent in La Pobla, they told him that they would very much like to have a garden behind their factory. Out of gratitude for the family’s hospitality, Antoni Gaudí made them a sketch. It is from this sketch that Jardins Artigas came into being.

It should be said that in 1905 Gaudí was working in Barcelona on the construction of Park Güell, so the sketch he made of the garden took its inspiration from this park. It seems that when he returned to Barcelona with the design for the Xalet de Catllaràs, Gaudí himself sent two workers to La Pobla de Lillet to start work on the garden he had drawn.

The place where Jardins Artigas were built is in a very wild environment with the river Llobregat running between large jagged rocks and abundant indigenous vegetation. The architectural structures are the same as in Park Güell, but the materials used to build the garden were taken from the mountainous area near the Pyrenees where La Pobla de Lillet is situated. Therefore the materials you will see in the garden are stone slabs, pumice stone, pebbles from the river and marl, together with Portland cement which was used for the garden’s balustrades and naturalistic murals.
Besides the Llobregat river, there are plenty of water sources, with a large number of fountains spouting from the springs of natural water running down to the river. All that Gaudí did was to decorate them and make them into fountains with figures from which they take their names, such as La Cascada (The Waterfall), Font del Bou (Bull Fountain), Font del Lleó (The Lion Fountain) and Font de la Gruta (Grotto Fountain). The bridges, Pont d’Escala and Pont dels Arcs, were built to provide a way across the Llobregat and link the two banks of the river. Standing on a pronounced blade of rock overlooking the whole garden is La Glorieta, a summerhouse with a magnificent view.

There are various symbols to look out for in the garden such as the Four Evangelists presided over by the figure of an eagle majestically watching over the garden from the side of the Glorieta del Bou (Bull’s Summerhouse), the lion and the Angel, which originally stood inside the waterfall, but has not been reproduced. Snakes protect the only entrance Gaudí designed for the garden. Other points of interest include the caryatides with the figure of man and woman, the fisherman’s corner, the picnic area with its naturalistic mural and the bamboo reeds.
Ajuntament de La Pobla de Lillet
(La Pobla de Lillet Town Council)

The one-hour guided tour is only available for groups of up to 20 people. The tour explains the industrial past of La Pobla de Lillet, the arrival of Antoni Gaudí i Cornet in the town and the architectural features of the only humid garden designed by this brilliant architect. The tour is tailored to the schools.

For guided tours, prior reservation is required at the tourist office: 687 998 541, at least one week in advance.

There is a reduction for groups and for school groups.