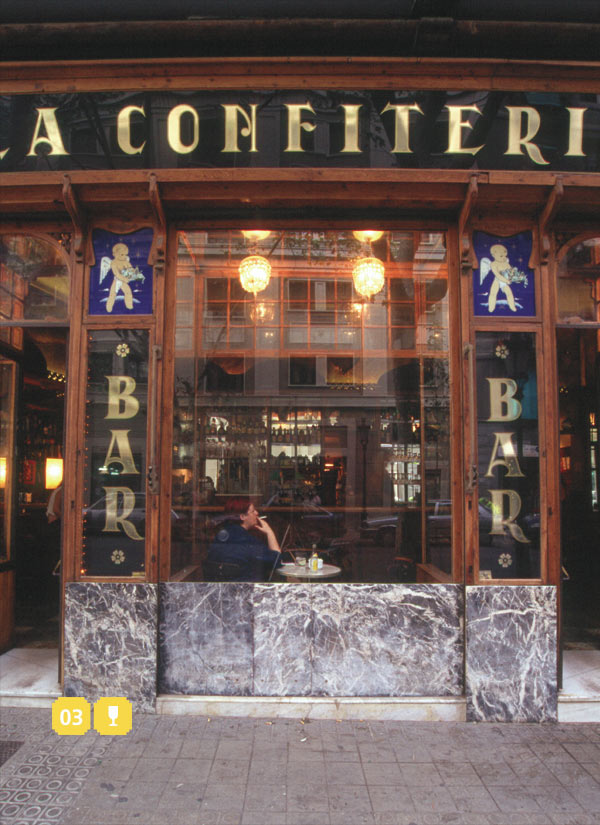 It seems that the premises of this bar were formerly occupied by a barber's shop, and before that by a fleet of berlines (light horse-drawn carriages). The Pujadas family bought it and converted it into a confectioner’s between 1912 and 1913, according to the business ledger, which has been preserved. From then on the confectioner’s shop was on the ground floor, the dwelling in the interior and the work area in the basement. It was run by the same family for many years until it finally closed in the 1980s, after which the premises were left in disuse for many years. In 1998 the premises were acquired by two young entrepreneurs, Núria Benet and Curro, who recovered and restored the whole decoration and re-opened La Confiteria, but now as a bar and restaurant.

On the facade the bar has two access doors and three display windows of iron and glass, together with a Noucentista style decoration of small angels. The decoration of the display windows changes continually, and while one displays old books and photographs the next one may display radical art exhibitions. In the interior, all the walls are covered with a wooden display cabinet with a mirror or etched glass backing and geometric decoration, with predominantly straight lines forming branches. This cabinet is crowned by curved panels decorated with vegetable motifs and has flowers painted on the inside. Before the last restoration it was covered with decades of paint layers, but the exposed woodwork has now been revealed. The space between the top of these cabinets and the ceiling is filled with oil paintings on canvas showing bucolic landscapes with female figures. No reference has been found of the names of the people who worked on the decoration of the establishment.

The counter of the former confectioner’s is now used as a bar. It is practically intact, though a skirting was added to give it more height and the glass sweet drawers were removed because of their fragility. On the counter, half-way along the bar is the old cash register of the shop, and the glass display cabinet has been used to fit the beer pump. Also, as one enters on the right, the bookkeeping table has been conserved as a decorative element with an ornate glass partition. The interior space—which was formerly the dwelling and seems to have had no Modernista decoration—now contains the tables where the clients can have something to eat. In 1998 this space was restored and redecorated with a totally contemporary design that also fits in with the style of the entrance. This was achieved partly thanks to a skilful use of the original materials: for example, the current doors of the toilets and kitchen are those that previously separated the corridor leading to the interior dwelling from the shop.

In addition to its aesthetic charms, La Confiteria also offers an outstanding selection of wines and high-quality cold cuts, cheeses and pâtés, including its speciality, foie de la Marona. The atmosphere of the bar varies according to the time of day: in the afternoon it is frequented by people who wish to have a quiet snack or a chat, but at night it is filled with a very varied clientele who drink until the early hours or come to have a light snack after leaving one of the theatres on the Avinguda Paral·lel. It has a pleasant atmosphere with a wide and carefully selected range of modern music. The establishment also organises a range of other activities, houses exhibitions every two or three months, and holds concerts within the Jazz Festival of Ciutat Vella.