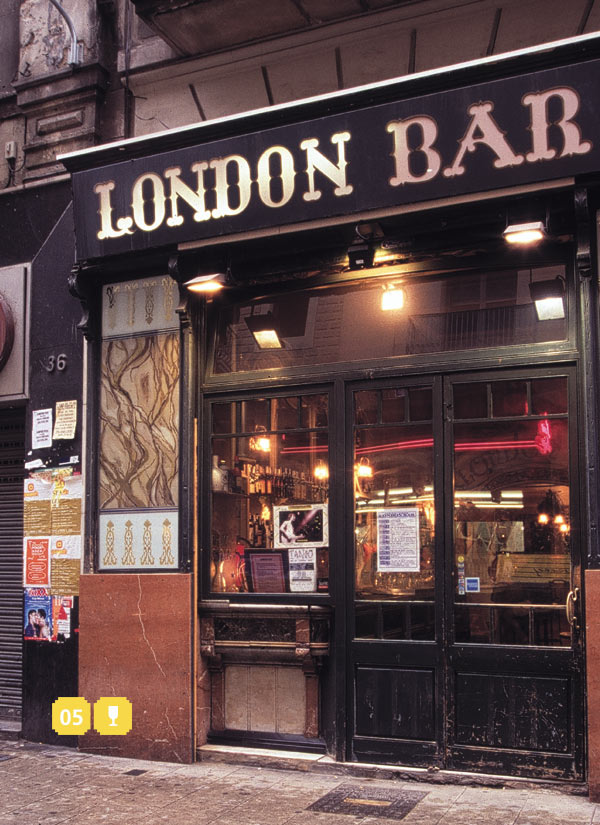 A Modernista bar that has been open for almost a century, since 1910 (for further information see Let’s Go Out, the guide to Modernista bars and restaurants).

Josep Roca i Tudó, born in Copons in 1883, came as a young man to Barcelona. He worked as a waiter in several bars of the old city until 1909, when he bought premises at Carrer Nou de la Rambla number 34 (the street was then called Conde del Asalto). He opened a bar there in the following year (on 23 June 1910), which he decorated with an unsophisticated Modernista language. The name of the designer is not known, but we have the names of some of the workers who were acquaintances and friends of Josep Roca and took part in the decoration: Pedrerol was the carpenter, Xampanyer was the painter, and they were assisted by a team of joiners, masons and plasterers. On the death of the founder, the establishment was taken over by one of his daughters, Dolors Roca, and her husband Pere Bertran. The current owner is still a member of the family of the founder—his granddaughter Elionor Bertran, who took over the management of the bar in 1976 together with her husband José Antonio Alabalá.

Despite the passing of the years, the bar has preserved its interior. Initially the whole premises were not occupied by the bar and it was not decorated in the same way. The Modernista decoration occupied a little over half of the establishment, consisting of the bar area: the inner room, which was not decorated in this style, was used for artistic and cultural activities, and after the civil war it was used as a place for rehearsal of circus artists. The two spaces have now been combined to form a single establishment and the inner room has a stage for performances.

At the entrance door, the wooden frames with the bar’s name in the centre already give an indication that this is no ordinary bar. After the Civil War, the fascist authorities forced all the Catalan names (or any non-Spanish names, for that matter) in the shop signs to be translated or substituted by Spanish names, but the London’s owners decided to hide—rather than destroy—the sign, and this has allowed it to survive. The main features of the interior are the mirror-backed display cabinet that was so characteristic in all the establishments of the period, decorated with curved lines intersected by flowers and with scrolls and vegetable motifs at the ends. All the wood is painted in cream colour combined with gilded ornamentation and lines. This same ornamentation is repeated in an arc located half way along this section of the bar, which bears the name of the establishment. The name can also be seen on the door to the second room, though this door was fitted more recently. The first bar, the only original one, is in coloured marble with carved flowers at the top, and this motif also appears on the wainscot of the first original section of the establishment.

From the very beginning, the London was frequented by circus people because many circus, theatre and entertainment agents had their offices in the same street. It was also open 24 hours a day, so sooner or later all the bohemians of the city dropped in. All the decorative elements conserve the spirit of the turn-of-the-century bar that was a meeting place for young artists such as Miró, Picasso and Gaudí, and many people from the art world and especially from the circus, which is still recalled today by the trapeze hanging near the entrance.

The London Bar does not have the relaxed atmosphere of an old café because it never was one exactly—in fact it was a meeting place for persons with cultural interests. Still today a large part of the clientele are people from the art world, in the widest sense, who go there to chat and listen to music, or even on occasions to offer impromptu performances on the trapeze. The owners tend to be open to all kinds of cultural activities, ranging from traditional cultural gatherings or exhibitions to more innovative initiatives. However, since the 1970s the most popular activity has been live music, and such well-known artists as Loquillo, Jarabe de Palo and Fundación Tony Manero have performed there. Every night at 12.30 there is a concert of some type of music: jazz, singer/songwriters, rock, funk, etc. Entrance is free but you must buy a drink. The concerts of the month can be consulted on their web page.

A very relaxed place in the late afternoon, packed for the concerts, and very lively until well into the early hours. It is mostly frequented by young Catalans, but it is also well-known among foreigners and the easy-going atmosphere makes it easy for anyone to feel at home there.