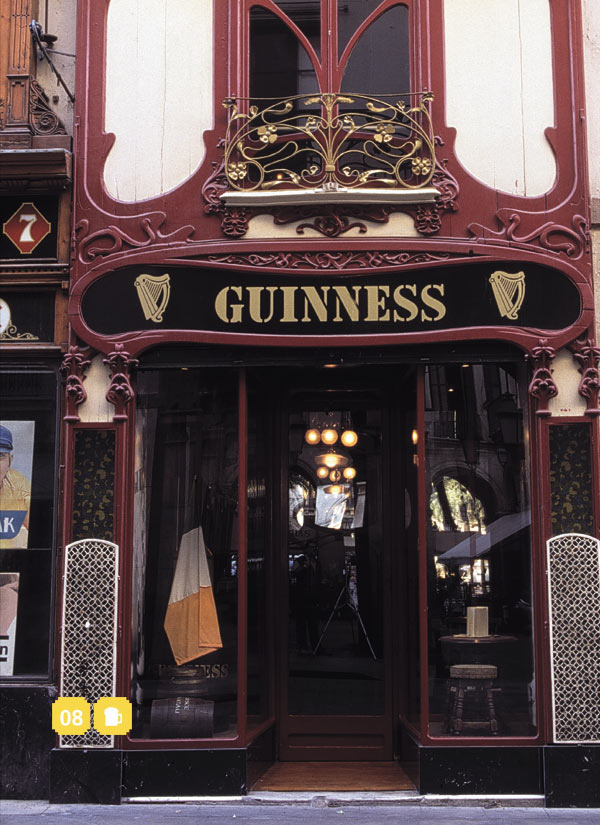 An Irish pub which was previously a shop and still has much of the original Modernista decoration on both the outside and the inside (for further information see Let’s Go Out, the guide to Modernista bars and restaurants).

Walking along Carrer Ferran, when you come to numbers 7 and 9 you may be surprised to see people drinking beer in a Modernista shop. It is an Irish pub that occupies two premises, one of which (at number 7), still has the original interior and exterior decoration in clearly Modernista style, which is not surprising because in the early 20th century this was one of the main shopping streets of the city. Molly’s Fair City is therefore not strictly a Modernista bar, but a contemporary bar that has been created by joining two spaces whilst carefully conserving the Modernista elements.The first references to these premises date from the late 19th century or early 20th century. In about 1893 the owner was a man of French origin called Marnet, who ran a business in the premises, though it is not sure whether he sold gloves and accessories or cold cuts. A delicatessen was opened on the premises by Miquel Regàs i Ardèvol in around 1910. This shop, which regularly advertised in the press (advertisements from 1913 and 1914 have been conserved), continued until 1922 and it seems that in this whole period of time Regàs conserved the original decoration intact. The following establishment that opened was a gift shop called Wolf or Veciana, the latter being the name of the owner. The decoration of the premises is often also attributed erroneously to Veciana. He did, however, make a small modification: in 1979 the large entrance doors were replaced by display windows and the doors were used to make a display cabinet in the interior. The current owner of the premises, a Viennese called Michael who has settled in Barcelona, took over the premises in 1999 and carried out a restoration that was very respectful of the original and of the conversion of 1979, changing only a part of the wainscots.

On the exterior, the facade of number 7 (which is not the entrance to the bar) has a wood cladding on two levels, the ground floor and the mezzanine, which gives balance and unity to the whole. On the upper floor the wood frames a small balcony with wrought iron railings in undulating forms and with floral motifs similar to the floral decoration of the lintels. The two side panels of the mezzanine have an elliptical form framed by curved wooden mouldings with undulating lines. In all the images of the facade that have been conserved the wood is painted in two colours, garnet red and white, but it may have originally been of natural colour. The shop sign, which until very recently was that of the previous business, Wolf, has been replaced by an advertisement for Guinness stout.

The interior of this part of the bar is small in size and is also clad in wood. It still has the wainscots with interwoven floral decoration on the back wall. Breaking the continuity of the wainscot is a slender cupboard with a wooden crown in the purest Modernista style, finished with undulating forms and floral patterns. The wood used to make this crown was formerly a frame of stained glass with floral motifs that has not been conserved. Though we do not know the name of the decorators, it is obvious that the carpenters belonged to the Modernista movement, with strong influences of the international Art Nouveau style that was then the rage in Catalonia.

The Irish pub Molly’s Fair City offers, of course, traditional Irish beer, but one can also try its liqueur shorts with evocative names such as “Deep Throat” and “Choc Pop”, or the more predictable “Baby Guinness” (which is in fact made not from beer but from coffee liqueur and whisky cream).

The pub has a clearly international and multicultural character, and one can hear a good mixture of languages there every day. It is a bar with a warm and welcoming atmosphere, in which one can obviously hear Celtic music but also Anglo-American pop and rock. All of this makes it a good place to meet people—and to practice languages. The staff of the bar—mostly Irish or local—are a cheerful, friendly and polyglot bunch who are used to giving advice on basic questions of survival to foreigners who have just arrived in the old part of Barcelona. The strategic location of this Irish pub also means that the waiters are mercilessly subjected to questions by tourists with little sense of direction and few language skills, but this is something that the staff of Molly's seem to accept with a certain stoicism. As they say, “at Molly’s there are no strangers, only friends that you haven’t met yet”.

The liveliest days of this establishment—without, of course, forgetting Saint Patrick’s Day on 17 March—tend to coincide with major sports events such as important football matches, which are offered live on its large television screens. The bar also organises sundry activities related to the festivals and events of the city of Barcelona and special promotions of the establishment. The top floor, which is only open at the weekend, can be reserved for private celebrations.