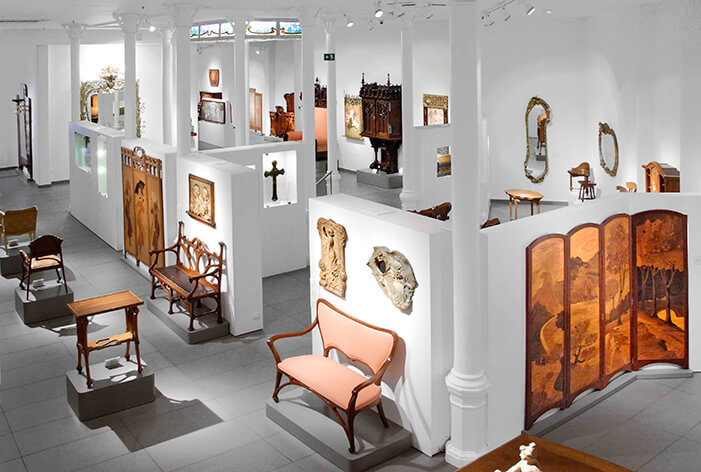 In March 2010, the Museum of Barcelona Modernisme (MMBCN) was inaugurated in the centre of Barcelona, the first museum specialising in Catalonia’s Modernista period. To understand the origins of the collection we must go back to the 1970s, when the husband and wife team of antiquarians Fernando Pinós and Maria Guirao began their activity with the Gothsland Gallery, which specialised in Modernisme and compiled a great number of pieces of incomparable artistic and historical value. Their intention to show these pieces to the public triggered the creation of this current museum’s collection. The MMBCN is located in the heart of the Eixample in a Modernista-style building designed in the early 20th century by the architect Enric Sagnier (Barcelona, 1858-1931), the most prolific architect of the period with over 300 listed buildings. The site was originally a distribution warehouse for the Fabra i Coats textile company and was later renovated to house the collection, highlighted by the restoration of the Catalan vaulting in the basement. The building and its façade provide the ideal setting to house the exceptional works of art that used to decorate the interiors of the most emblematic Modernista houses and comprise a historical and aesthetic document of a brilliant and magnificent era in Barcelona. With its 1,000 m2 of permanent exhibition space, the MMBCN allows visitors to enjoy unseen works from different disciplines, such as furniture, paintings, sculpture or decorative art, pieces that reflect the historical as well as social and intellectual changes in the city. The new artists were concerned with introducing new techniques and seeking models, colours, forms and elements inspired by nature, which was the undisputed protagonist of the aesthetics of Modernisme. In the section on furniture, you can find cabinetmakers and marqueters that represented the bourgeois spirit, such as Joan Busquets and Gaspar Homar. The room dedicated to Antoni Gaudí reflects the prolific work of this brilliant architect, with pieces that are both functional and decorative – from chairs, columns or writing desks to wrought iron frames or hangers – and once formed part of important buildings designed by him, such as Casa Calvet or Casa Batlló. The space dedicated to painting, sculpture and decorative arts displays a much wider and varied range of representative artists: Eusebi Arnau, Miquel Blay, Joan Brull, Gaspar Camps, Ramón Casas, Lluís Graner, Lambert Escaler, Laureà Barrau, Pablo Gargallo, Josep i Joan Llimona, Joaquim Mir, Alexandre de Riquer, Santiago Rusiñol, Pere Borrell, Modest Urgell and Antoni Utrillo, among others. All of whom provide a comprehensive vision of this age of contrasts known as Modernisme, displaying a wide variety of subjects in which we can contemplate both scenes of everyday Catalan life – albeit of a bourgeois or anecdotal nature – and social subject matter, including landscapes, mythological, historical or literary scenes and countless iconographic symbols and elements drawn from the ever inexhaustible imagination of these artistic geniuses.

The Museum reopens from November 4, 2021 and until February 4, 2022 an exhibition focused on nine women who stood out in the artistic scene of the late nineteenth and early twentieth century.
To purchase tickets: https://www.gothsland.com/es/entradas/

Discount of the Modernisme Route: 25%.