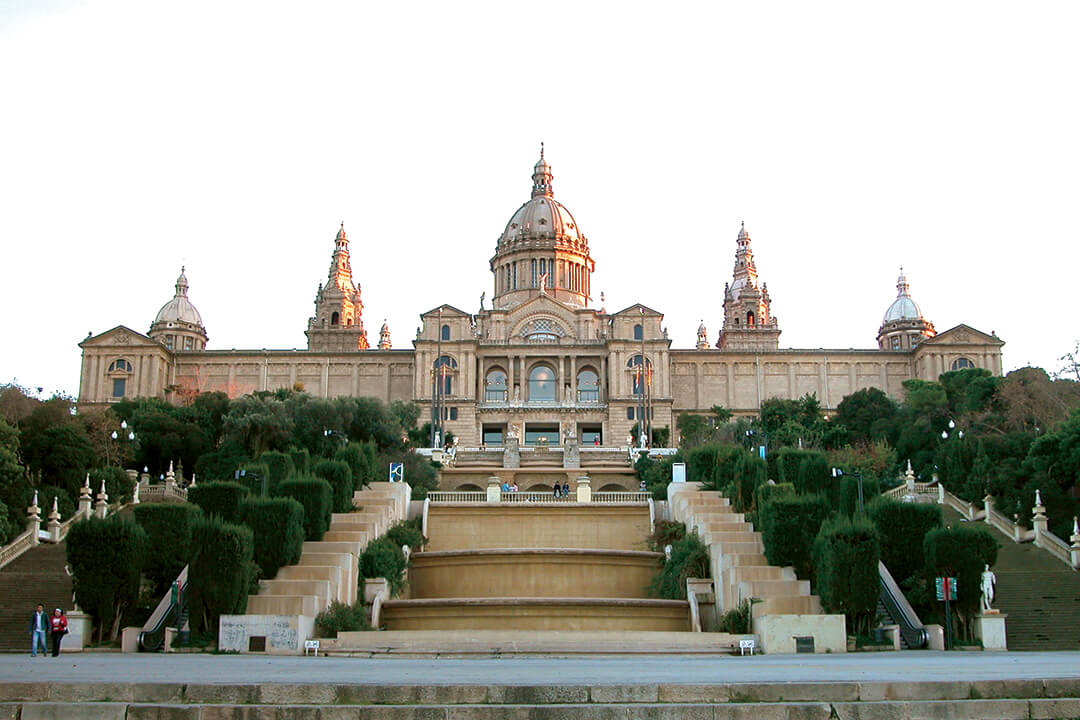 The rise ends right in front of the majestic PALAU NACIONAL, (NATIONAL PALACE), which was the main hall of the International Exhibition. Built between 1927 and 1929 to the design by Eugeni P. Cendoya and Enric Catà, with the collaboration of Pere Domènech i Roura, this edifice falls within the style known as Eclectic Monumentalism. It currently houses the MNAC MUSEU NACIONAL D’ART DE CATALUNYA,(33) CATALUNYA (NATIONAL ART MUSEUM OF CATALONIA.), which since 2004, on completion of the rehabilitation work on the building, has finally regrouped all its collections. These collections embrace over a thousand years of Catalan art: painting, sculpture, arts of the object, drawing and engraving, photography, numismatics and medals. Naturally, this includes a good exhibition of Catalan art from the mid-19th to the mid-20th century. The collection of the MNAC is the most representative of the Modernista movement in Barcelona, displaying the most salient works of this artistic style in all their diversity: painting, sculpture and decorative arts. A visit to the Museum is also essential in order to place the work of the Modernista architects in the artistic context of their time. For example, though Gaudí did not frequent the Modernista coteries, he was friendly -and there were mutual artistic influences- with several artists who belonged to the movement, such as the sculptors Josep Llimona and Carles Mani and the painters Joaquim Mir, Anglada i Camarasa, Francesc Gimeno and Darío de Regoyos, all of whom are represented in the collections of the Museum. Many of the works on display refer to sites on the Barcelona Modernisme Route. Here one can see, for example, the original work Ramon Casas and Pere Romeu on a tandem (1897) by the painter Ramon Casas (1866-1932), which decorated Els Quatre Gats (23), where you have seen a copy. The rich collection of decorative arts of the Museum shows us the interior decor of the main floors of some of the most emblematic houses of Modernista architecture, such as those that form the famous “Mansana de la Discòrdia” on Passeig de Gràcia. The Museum shows several elements of the furniture from Casa Amatller (44), by the architect Josep Puig i Cadafalch, such as a bench, a glass cabinet and a ceiling light designed by the architect himself. It exhibits several designs by Antoni Gaudí from Casa Batlló (45), such as a sliding door, a chair and a sofa that is very characteristic of his style. The architect Lluís Domènech i Montaner, who designed the Casa Lleó Morera (43), commissioned the interior decoration of the main floor of the building to the Majorcan cabinetmaker Gaspar Homar (1870-1953), one of the main figures of Modernista decorative arts. His designs won prizes in Barcelona, Madrid, London (1907) and Paris (1909). Of this decoration, the Museum exhibits almost the complete living room, as well as other elements from the rest of the dwelling, such as a sofa with glass cabinets and inlaid panelling at the sides. To complete the vision of modern art in Catalonia, visitors should not neglect the work of other artists and movements from before -Marià Fortuny and the followers of the Rome School- and after Modernisme. The second generation of Modernista artists such as Joaquim Mir; the artists of the Noucentista period such as Joaquim Sunyer, Joaquim Torres Garcia and Manolo Hugué; and the avant-garde sculptures of Gargallo and Juli González are especially interesting.

Free on Saturdays from 3pm.

Closed: Mondays (except holidays) and on January 1st, May 1st and December 25th.

Discount of the Modernisme Route: 30% off the adult price (price including discount €8,40).

Restaurant with a view.

Rooftop terraces with a view over Barcelona.


Tiquet booths close at 6.30pm; 2pm on Sundays and holidays.
Timetables may vary.