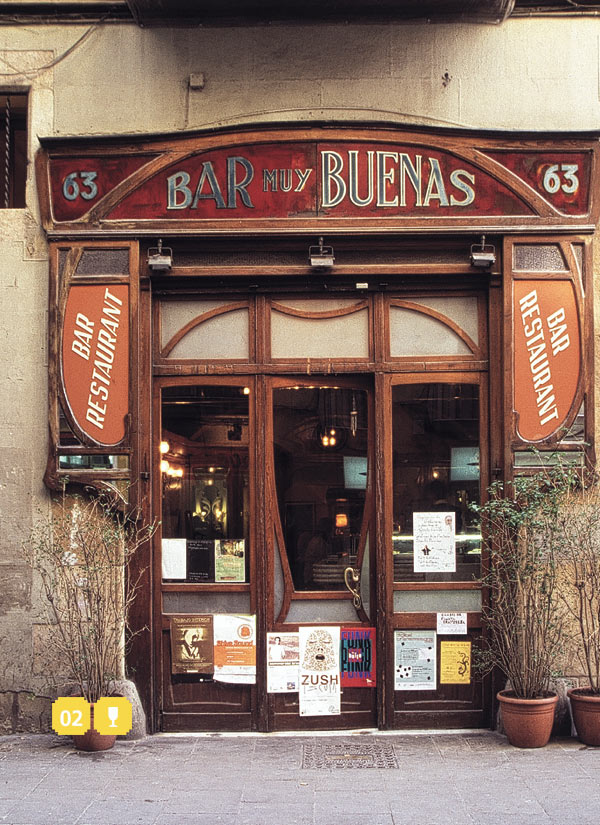 The origins of the Bar Muy Buenas go back to the late 19th century, when it was founded as a dairy-bar by a member of the Serrano family. The establishment was passed from father to son for three generations (it was given the name Bar Muy Buenas in 1928) until 1996, when Antonio Serrano sold it to the current owner of the bar, Antonio Magaña, who has restored the premises to its original appearance.

The entrance to the establishment gives a subtle glimpse that is a slightly different establishment, not because of the exaggerated decoration but because of the gentle undulating lines that frame the sign and even the door handle. The counter of the bar is the original one and has now been restored to its original function, though for years it was placed in another part of the bar as a decorative element. It is a marble counter with a pair of compartments that were originally filled with ice for cooling the drinks. The two water taps have been replaced by beer taps.

Another interesting feature of this bar is the splendid partition of Scots pine and glass etched with floral motifs, which was originally the door between the dairy shop and the dining room, and now separates the bar area from the rest of the establishment. The bar area has a surprisingly high ceiling, created by removing the mezzanine that was formerly used as a dwelling. In the interior space practically none of the Modernista decorative elements have been maintained, but in the summer of 2001 Mr. Magaña commissioned an Argentine painter to decorate the bar with a mural. The result was a success and gives an appearance of modernity, though the sinuous lines and motifs on the door of the bar also offer a taste of Modernista style. The tables have been painted to match the mural. The upper floor has a special atmosphere created by the small wooden balcony—the top of the Modernista partition—that overhangs the bar area. In general the bar is decorated with simplicity and taste, creating a special atmosphere that is comfortable, open and friendly.

When Antonio Magaña bought the business his aim was that it should continue to be a bar, but also a centre for a variety of cultural activities: music, poetry readings (Wednesday nights), exhibitions by young artists and cultural gatherings. It is thus characterised by having a young clientele who mainly live in the city, though it is open to everyone and particularly to new ideas. The Bar Muy Buenas is not only a place to have a drink or a coffee, but also offers meals at very reasonable prices, and its menu includes a wide range of dishes from different cultures of the world. Also, at any time of day one can have one of its specialities, the “torrijas àrabs” (arabic cakes), or choose from its increasing range of teas and imported beers. As the night progresses the tables are cleared, the music gets more lively and the Muy Buenas becomes a nightclub and meeting point where one can try its famous mojito cocktail.

Restoration of the exterior façades.