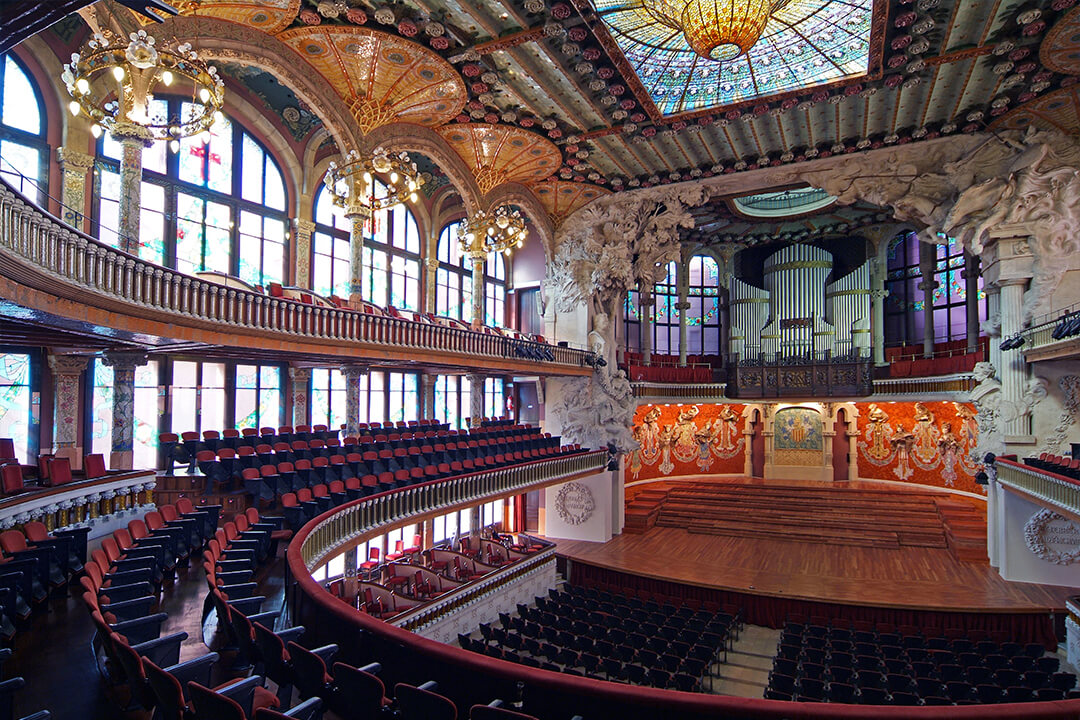 Slightly hidden behind it one of the essential jewels of Modernisme in Barcelona: the PALAU DE LA MÚSICA CATALANA (24). (PALACE OF CATALAN MUSIC). The Palau de la Música was commissioned by the Orfeó Català choral music organisation to the architect Lluís Domènech i Montaner in 1904. The first stone of the new building was laid on Saint George’s day 1905 and the construction went on for three years. The result was a lavish concert hall for performances of Catalan choral music. The building was located on the site of the former monastery of Sant Francesc de Paula: the small site and the high price of the adjoining land at the time forced Domènech i Montaner to fit the auditorium into a tight grid of streets that limited the views from the exterior, and to find ingenious solutions to provide sufficient space for the stage and to include the offices and archives of the Orfeó in the building. The church of the former monastery, converted into a parish church, survived until very recently, when it was demolished to provide more space for an extension of the Palau. This project, signed by Oscar Tusquets (2003), used the space to open a square which discovers the huge stained glass windows by Domènech, previously hidden behind the old church. This has been flanked by two cylindrical brick towers, in imitation of Domènech i Montaner, the one on the corner sculpted with the image of a luxuriant tree. Under the large square is the Petit Palau, a new multi-purpose hall with a capacity for 600 people. Like La Pedrera, it is a supreme example of Catalan Modernisme, with its bold, brilliant and lavishly decorated architecture. The Palau is one of the most outstanding buildings in the city, and proudly bears the category of UNESCO World Heritage listing. But this was not always the case. The Palau was one of the last extravagances of Modernisme, and even in the 1920s it began to be questioned to such an extent that in the neighbourhood it was known as the “ironmonger’s palace”, and the architects of the time were in favour of demolishing it. Fortunately, they never achieved their aim and the Palau has become an institution with a special place in the collective memory of Barcelonans.The Palau de la Música Catalana was opened in 1908 with a brief concert of works by Clavé and Händel. The façade of the Palau de la Música struck Barcelonans: of exposed brickwork combined with colourful ceramic mosaics, the corner features sculptures by Miquel Blay in the form of an enormous stone prow, representing an allegory of popular music with two boys and two old men embracing a nymph while Saint George protects them with the Catalan flag flapping in the wind, as it were. This is one of the most characteristic elements of the Palau, a work of great conceptual symbolism. The façade also has a mosaic representing “La balanguera”, a poem by Joan Alcover -today the anthem of Majorca island- surrounded by the singers of the Orfeó Català. Other points of interest on the exterior of the Palau are the peculiar ticket offices located inside the columns flanking the main door, now out of use. The rich details continue in the interior: a lavishly decorated foyer, with vaults lined with Valencian tiles and a double stair with golden glass balusters, are the hors d’oeuvres for the true jewel of the building. The visually overwhelming concert hall is an inebriating succession of sculptures, stained glass, mosaics and decorative elements that constantly play with the perception of light and colour. The most characteristic image of the hall is its enormous and spectacular skylight of stained glass, which weighs a metric ton. This marvel of lavish art, in the form of an inverted bell, represents a circle of female angels forming a choir around the sun. Domènech i Montaner’s obsession with light is not limited to the skylight. He designed the concert hall, with its light steel structure, as a kind of glass box that filters the exterior light through windows that recall those of Gothic cathedrals and help to give the auditorium a sacred atmosphere. The stage of the concert hall is without doubt the most spectacular sculpture in the Palau. The proscenium features an unusual composition in pumice stone designed by Domènech i Montaner and sculpted by Dídac Massana and Pau Gargallo. On the left, the composition includes a bust of Josep Anselm Clavé and an allegory of the flowers of May, representing popular music. On the right, the bust of Beethoven personifies universal music. Above him, Wagnerian valkyries ride silently toward Clavé, symbolising the link between new music and the old Catalan musical folk culture. The stage is completed with a spectacular organ built in Germany and recently restored thanks to popular subscription. The hemicycle designed by Eusebi Arnau and faced with the ceramic fragment trencadís, features 18 sculptures that represent the spirits of music, together with a somewhat surprising Austrian coat of arms. A row of balconies and a colonnade of Egyptian influence make a modest contribution to the embellishment of a concert hall that is considered a sanctuary of music, in which musicians of the category of Rubinstein, Menuhin and Pau Casals have performed. Other elements of interest in the hall are the floral motifs that decorate all the ornamental elements, both on the ceiling and on the stained glass, and the mediaeval-like lamps, rather more suited to a castle than to a concert hall. Other spaces of interest in the Palau are the chamber music hall, in which one can still see the founding stone of the building, and the Lluís Millet Hall, which is perhaps the space that remains most faithful to the original design by Domènech i Montaner.

Restoration of sculpture by Miquel Blay

It is possible to purchase the entrance tickets online: www.palaumusica.cat or by telephone 902 475 485.

Discount of the Modernisme Route: 20% Discount on the guided visits


Visits last approxiamtely 50 minutes. Tiquets sold at the shop Les Muses del Palau and at the concert hall ticket booth.
Largest group 55 members.
Visits in English at every hour o’clock.
Timetables may change or be altered by concert hall needs.