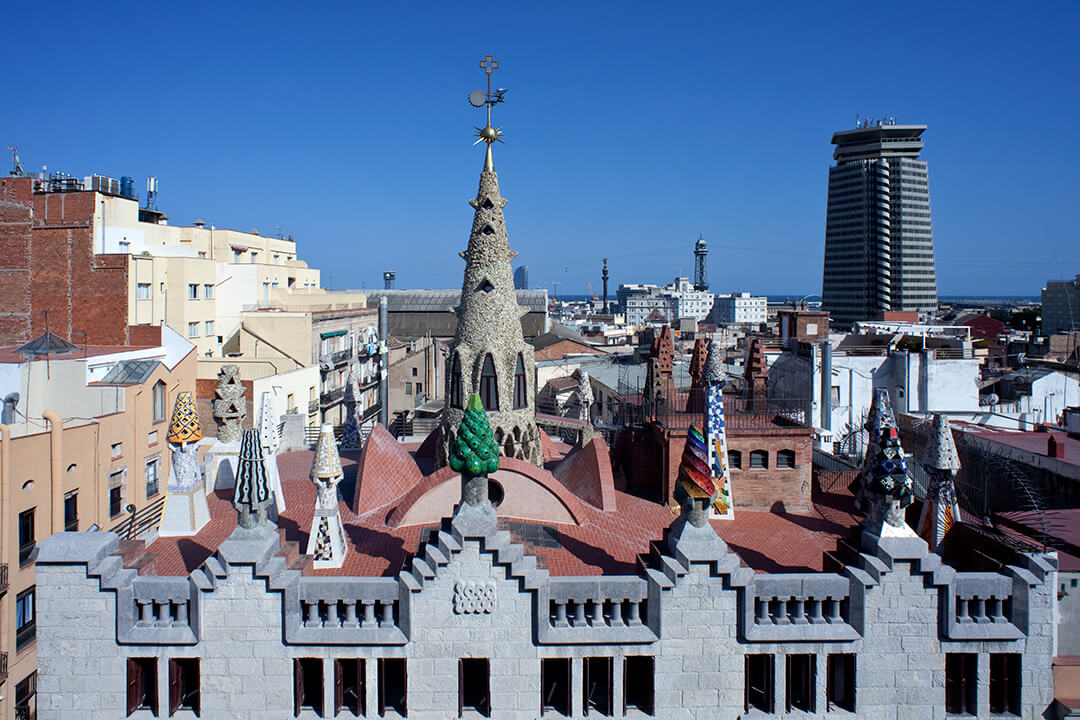 The first work (1885-1889) that Antoni Gaudí, the most peculiar and striking architect of the Modernista movement, would offer the city of Barcelona, and now listed World Heritage by UNESCO. Gaudí was only 34 years old when he was commissioned to build the private residence of the Güell family. Interestingly, it was not located in the Eixample, a booming area to which the bourgeoisie were moving, but in El Raval, which by the late 19th century had already become quite rundown. It may not seem very logical that Güell, who had ten children, went to live there in 1888. But one of the main reasons that he decided to build Palau Güell in El Raval was the fact that he had inherited a house on La Rambla dels Caputxins, which he lived in from 1884 and which was joined to Palau Güell by an interconnecting corridor. It could therefore be said that Palau Güell was designed as an extension to the family home on La Rambla. Eusebi Güell was a prominent businessman and politician, but also a promoter of Catalan culture, arts and letters. He placed his trust in Gaudí at a time when the architect was still unknown, yet he was able to see his talent and commissioned him to build this unique urban mansion. Gaudí’s aristocratic patron gave the architect free reign in terms of budget to build a unique and sumptuous mansion that could accommodate political meetings, cultural and literary evenings, concerts and receptions attended by illustrious guests. No sooner said than done. Gaudí used the most precious materials and construction costs soon soared. The end result was a true masterpiece, Gaudí’s first major work and one of the first, if not the first, Art Nouveau buildings worldwide. Gaudí’s Palau Güell is an unusual space dominated by the clever, precise and magnificent play of light on forms and it points the way to many of the essential features of Gaudí’s later work. The Palau Güell’s façade, with its suggestive Venetian lines, is built in stern-looking stone and one particular highlight is the wrought iron design above the tympana of the two parabolic arcs making up the main entrance and exit to the building, which together form the majestic coat of arms with the four stripes of the Catalan flag presiding over the façade. A grand staircase leads from the vestibule past the mezzanine floor to the planta noble, or main floor, with its central hall, the true jewel in the crown of the Palau Güell: an amazing, mysterious and telluric space crowned by a parabolic cupola that is located at a great height. The copula is pierced by a round central window and a series of small circular openings that filter in soft indirect light and provide the space with the peculiar appearance of a planetarium under the light of day to some people or the main room of an Arabic hammam to others. The central hall includes the Palau Güell’s organ console and a chapel enclosed by two doors and it was used to stage concerts and religious services. The central hall is the backbone from which all the building’s spaces are distributed and at the same time it is a space that vertically and visually links together the mansion’s upper floors. The rooftop boasts twenty chimneys designed by Gaudí and restored between 1988 and 1992. The original forms of the rooftop were restored, but in the case of the chimneys they had lost all their cladding over time and so it was decided to provide them with a contemporary reinterpretation directed by the architects in charge of the building’s restoration and several Catalan artists. The chimneys are all unique and different as if they were the various sketches of an ideal model. With a little imagination, they recall a group of trees and most likely represent one of the first designs of a project that Gaudí would culminate years later with the Pedrera rooftop. In this particular work Gaudí used trencadís for the first time, a cladding made up of irregularly shaped broken tile pieces that this Reus architect, and the Modernisme movement in general, later adopted as one of his main forms of expression. At the opposite end of the mansion, in the basement, the stables can be found, with their brick vaulting supported by mushroom-shaped capitals, which are also constructed of brick. It is spectacular architecture designed to house the mansion’s stables and grooms quarters and is one of the most enigmatic, evocative and famous spaces in Gaudí’s architecture. Eusebi Güell, his wife and their children lived in the mansion until the 1910s, when they moved to Park Güell. Later, some of their children lived in the mansion until the Spanish Civil War. With the outbreak of the war, the Catalan Government used the building to house a police station. Subsequently, the eldest daughter, Mercè Güell, who had inherited the house, was not able to take care of its maintenance and so donated it to the Barcelona Provincial Council in exchange for a life pension in 1945. On 26 May 2011, the Palau Güell opened its doors to the public once again after years of comprehensive restoration.

Open: Tuesday to Sunday and holiday Mondays.
From 01st April to 30th September: 10 am to 8 pm.
From 01st October to 31st March: 10am to 05.30 pm.
Last admission one hour before closing time.
Closed: on Mondays (except public holidays), 1st and 6th of January, from 24th to 31st of January (maintenance week), and 25th and 26th of December. Open doors days check out at Palau Güell’s ticket office or at the website.