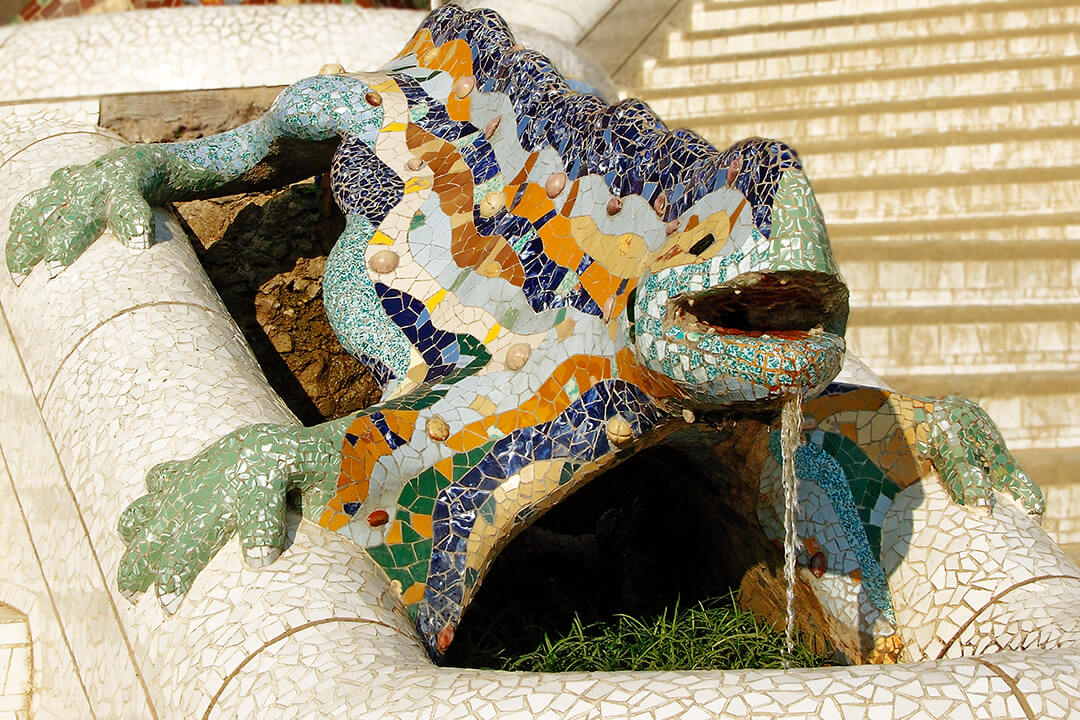 Gaudí’s unfinished urbanistic dream, listed UNESCO World Heritage in 1984. The most ambitious urban planning operation of Barcelona in the late 19th century was idea of Gaudí’s main patron, Eusebi Güell, who in 1899 bought an old rural estate of 15 hectares called Can Muntaner de Dalt for conversion into a luxury garden city inspired in Ebenezer Howard’s model (and so the name was -and still is- spelt the English way: “Park”, as opposed to “Parc”, in Catalan). Predictably, the person entrusted with carrying out Güell’s landscape planning scheme was Antoni Gaudí.

Gaudí’s project involved the construction of a housing estate of 60 private plots and large common greens. Gaudí devised the idea of a bucolic retreat for the highest bourgeoisie of Barcelona. Its location on the hillside and far from the city was ideal to symbolise the metaphor of the ascent to paradise, to Eden. The project, however, was a total failure. Development of the estate began between 1900 and 1904 and was definitively halted in 1914. One plot was purchased by the owner of the construction company developing the works, and two more plots were sold to a single purchaser, who had only one villa built. As for the common facilities, three crosses were built to mark the place where the chapel was to be erected, but only the two entrance pavilions, the retaining walls and all the road infrastructure around a large square supported by columns were completed. As a result of this financial disaster, the heirs of Eusebi Güell, who died in 1918, sold the site to the City Council, and it was decided to preserve it as a public park. The prodigious structures raised among the typical Mediterranean vegetation are a curious mixture of fantasy and spirituality, which the staunch patriot Gaudí interspersed with Catalan emblems. A work, in short, where Gaudí gave up his habitual historicism and boldly chose a language of his own ranging from naturally-inspired forms to a surprisingly avant-garde plasticity.

The main gate of Park Güell, featuring a brick wall decorated with mosaics, is protected by a wrought iron railing and flanked by two evocative pavilions that reproduce the story of Hansel and Gretel, which was performed as an opera at the Liceu in late 1900, the same period Gaudí began to design the Park Güell. The smaller one on the left with a double cross on the roof, is the house of the children Hansel and Gretel: it currently has a bookshop and souvenir shop on the ground floor. The bigger house on the right, crowned by a poisonous toadstool-shaped dome, represents the Witch’s dwelling and was the former house of the Park’s guard, although it is now home to the Interpretation Centre of the Park, part of the Barcelona History Museum. The free-access ground floor has information on Gaudí’s work. The free-access ground floor has information on Gaudí’s work, but you must pay a fee to go upstairs to see the original house of the guard and the exhibition “Gaudí and Park Güell. Architecture and Nature”. Beyond the two pavilions, on the right one can see a kind of grotto supported by a central column that becomes wider at the top, as if it were a wine glass, meant as a shelter for carriages and horses on rainy days. The main staircase is parted by a small waterfall featuring the famous multi-coloured dragon of glazed ceramic trencadís. The stairs lead to the hypostyle hall, also known as the Hall of the 100 Columns though it only has 86. This hall, originally intended to be the market of the future housing estate, was decorated by Gaudí’s assistant Josep Maria Jujol, who was given carte blanche to do so. The result was exceptional: an undulating ceiling of mosaic with varied incrustations forming capricious spirals. When this zone was restored in 1992 lights were added at the base of the columns, which create a spectacular resemblance to a Greek church at night. From the hypostyle hall two paths lead to the great circular square, a marvellous belvedere overlooking the city. According to Gaudí’s initial design, this square was to collect rainwater, channelled down inside the columns of the hypostyle hall to be collected in a huge cistern holding up to 12,000 cubic metres (not open to the public). The square is surrounded by a winding bench of trencadís in which the imagination of Gaudí and Jujol achieved an extraordinary boldness, considered by some specialists a forerunner of abstract art.

The bench is a symphony of colours: greens, blues and yellows are used in different combinations, forming moon shapes and stars and abstract flowers. Colour, however, fades away gradually from left to right, and at the far right the bench is mainly white, the symbol of purity. The bench seems to hint that human life is a kaleidoscope of colours that culminate after death in heavenly white. The white of this part of the bench is not, however, a pure white: here Gaudí used materials that had been rejected in other buildings, such as Casa Batlló, precisely because of the “impurity” of this white. The restoration of the bench in 1995 aimed to maintain this imperfection by using up to 21 different hues and shades of white to replace the deteriorated parts. Other unusual features of the Park Güell are its bridges and viaducts, with twisted, grotto-like columns. The fourth portico that connects the upper part with the lower part is perhaps the most Surrealist structure, with the leaning walls and arches that recall images by Dalí. The summit of the park is crowned by a monumental Calvary formed by three crosses at the place where Gaudí had planned to build the chapel. Even here the feverish architect had symbolic fantasies. If we look toward the east -toward Jerusalem, as it were- the perspective seems to merge all three crosses into one. This is the final point of the ascent: the cross is the ultimate symbol.

Park Güell was recognised as a site of Catalan National Cultural Interest (BCIN) in 1969 and was declared a World Heritage Site by UNESCO in 1984. This distinction is awarded to all natural areas and cultural features in the world of great value, which must be protected in order to guarantee their conservation, so that future generations can continue to enjoy them. This mission could not be undertaken without a constant task of conservation, restoration and protection of this cultural interest site. These works may sometimes affect your visit in some way, but they are essential in order to improve the condition and preservation of the park’s heritage.

For more information on any possible impacts, please visit:
https://parkguell.barcelona/en/disruptions

Restoration of the central staircase.

Ticket: €10.
Ticket with Modernisme Route discount: €8.
Discount applicable only on the general admission rate, and cannot be combined with other reductions and rates.