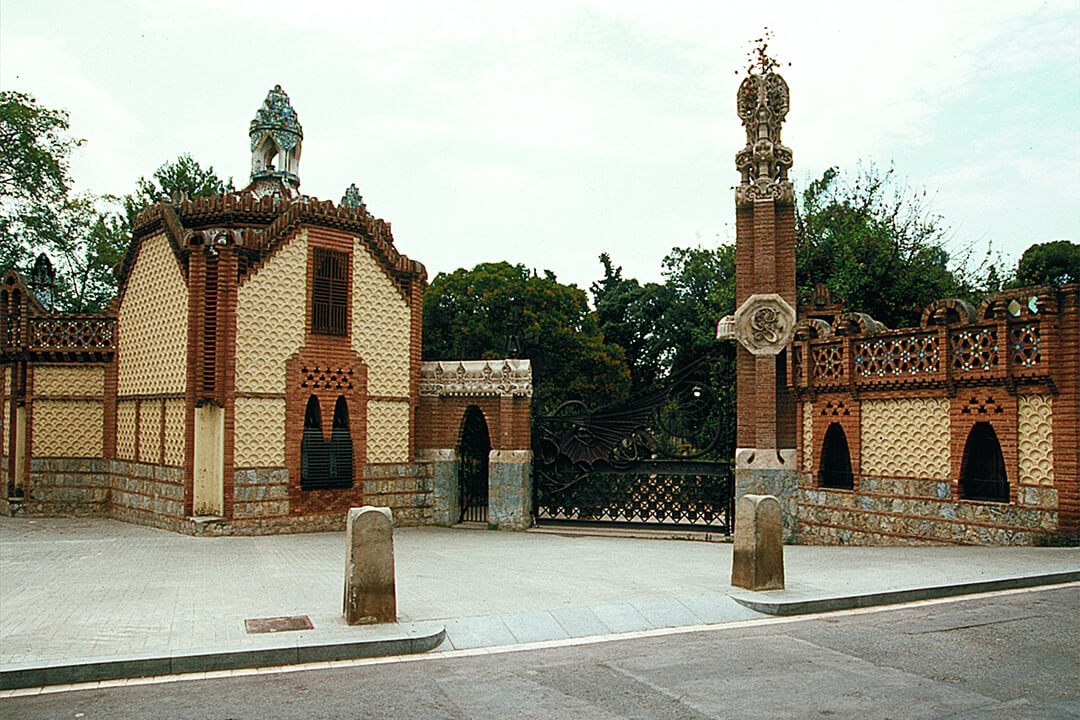 PAVELLONS GÜELL (90), (GÜELL PAVILIONS), of the old Güell Estate. Modernisme Centre of Barcelona, where you can buy the Modernisme Route Guidebook, with which you will be able to receive the free discount vouchers for the Route and information on Modernisme in Barcelona. Gaudí dedicated his life to his original vision of architecture and Eusebi Güell gave him the first means to make such an eccentric type of architecture into a reality. In 1883 Güell wanted to extend the estate that his father had bought and Gaudí was commissioned to carry out parts of this project, under the direction of Joan Martorell Gaudí designed the gatehouses and garden of the entrance to the estate from the old Sarrià road. In the late 19th century, the estate was mainly used as summer residence by the Güells, though its crops still provided some profit. For this job, Gaudí took inspiration from the Garden of the Hesperides as depicted by Jacint Verdaguer in his great epic poem L’Atlàntida. Verdaguer had dedicated this work -a sort of Catalan remake of Greek myths- to Güell’s father-in-law, the Marquis of Comillas, and had in fact finished writing the book on a stay in this very estate. The entrance features the striking Dragon Gate, a five-metre wrought iron sculpture that symbolises the mythological dragon of Verdaguer, with bat’s wings, a scaly body, great fangs and a sinuous tongue. The beast is not challenging Saint George here, but Hercules, as Verdaguer blended Catalan symbols with the classic references to produce his own images. The legendary tree in the Garden of Hesperides from which Hercules had to steal a golden apple, for instance, was in Verdaguer’s poem an orange tree, considered somewhat more Mediterranean. Crowning the right jamb of the gate, Gaudí placed a small sculpture of an orange tree, with little golden oranges. After the death of Eusebi Güell in 1918, the estate fell into disuse and the heirs granted part of the land to be converted into Barcelona's Palau Reial, the Spanish Royal Family’s official residence in the city. The gate, the old stables and gatekeeper’s house have been preserved and are now property of the University of Barcelona which in 2014 lent the space to Barcelona’s Municipal Institute for Urban Landscape until 2024 with the aim of opening it to the public and commencing with its restoration.

Restoration of the Dragon Gate.


The Modernista visit of the old Finca Güell from Antoni Gaudí includes the period machinery and construction tools used by Gaudí, as well as the spectacular crane utilized for the construction of the building of Casa Milà (La Pedrera), and Modernisme and Society and the documentary about the Art Nouveau movement and its relationship with society at the turn of the twentieth century. Timetables may vary.