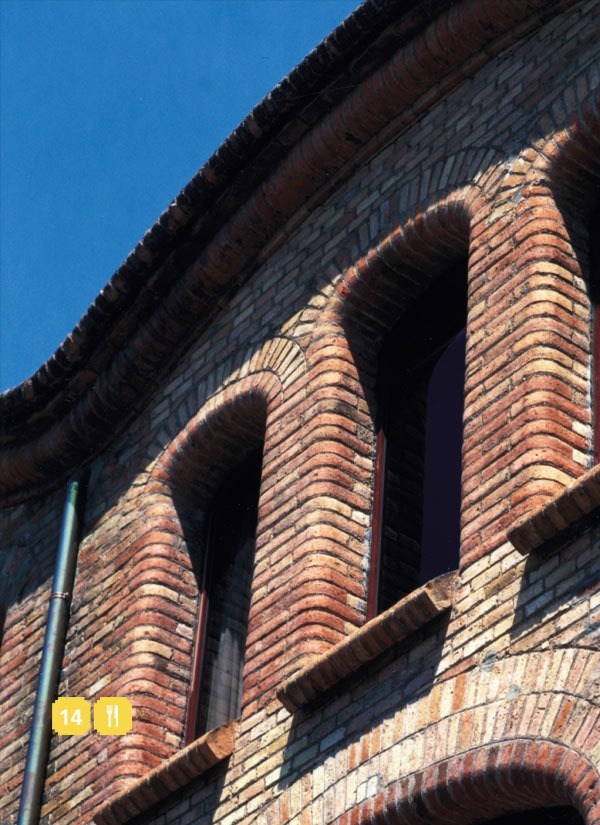 The Viena restaurant is in a Modernista building whose original purpose, when it was erected in 1908, was to serve as the headquarters of the Societat General d’Electricitat (General Electricity Company), a company set up in 1896 to produce and supply electricity. It was designed by Lluís Muncunill, Terrassa’s municipal architect at the time.

The large, brick-built edifice has two parallel rectangular bays roofed with Catalan vaults and divided into seven sections. It appears to be the first building in which the architect used the Catalan vault system, with seven highly pronounced curves forming the seven different sections.

The building’s façade on Carrer Unió features the name of the Societat General d'Electricitat displayed with broken tiles using the trencadís technique. The other façade bears the rest of the facing elements (rather austere in keeping with the building’s original function), which point to the interior structure, as they are also divided up into seven sections by the drainpipes running down the outside of the building. There are large windows at the bottom and sets of three windows on the upper floor.

From the 1950s to the 1990s, the building was used as a transformer station by FECSA, another electric company, until it was acquired by Establiments Viena, S.A., which then set about restoring it. The rehabilitation work has retained the whole of the factory’s original structure and follows the Modernista style in all the decorative elements that have had to be added, such as the lighting on the top floor.

It is interesting to note that one of the items restored during the rehabilitation process was an old coal bunker of whose existence nobody had been aware. It had once belonged to Vapor Busquets, a factory that had been on the same site since the middle of the 19th century until it was knocked down in 1907.

Following a long period while the alterations were carried out, the premises were opened to the public in July 2000, as Pizzeria-Restaurant Viena with a capacity for 279 people. Making good use of the large dimensions, the space is divided into three floors. On the ground floor, the first of the bays has tables, whereas the second bay contains the kitchen and the wood-fired oven where the pizzas are baked in full view of the clients. It is in this second bay that an upper floor has been constructed with a visible structure and open to the rest of the space below. The smoking area is on this floor.

Lastly, in the basement, there is the old coal bunker, a small, cosy space that is ideal for groups, where there is a permanent exhibition of old photographs of the building and the process of rehabilitating it. The exhibition contributes to the building’s commercial attractiveness while helping to create greater awareness of the town’s industrial heritage.

In the process of rehabilitating the building and creating new spaces within it, its Modernista origin was borne in mind and every effort was made to ensure that all the new work matched this style. This can be seen in the toilets, which have been decorated according to early 19th century taste with trencadís tilework and sinuous lighting after the Modernista style.

The restaurant specialises in home-made Catalan cuisine and Italian dishes, offering over a dozen starters, pasta dishes and pizzas (baked in the wood-fired oven) and meat and fish dishes, all prepared and cooked on the premises. The atmosphere is quite varied. Although the restaurant does not have a lunchtime set menu, the type of cooking it serves and its moderate prices mean that not only do many people go there for lunch during the week, but so too do families at weekends and parties going out for an evening meal. It can also be booked for functions of various kinds for up to 100 people.

Although it does not stage entertainment or cultural activities on a daily basis, it is one of the venues that takes part in the most important events held in the town, such as the famous Terrassa Jazz Festival.