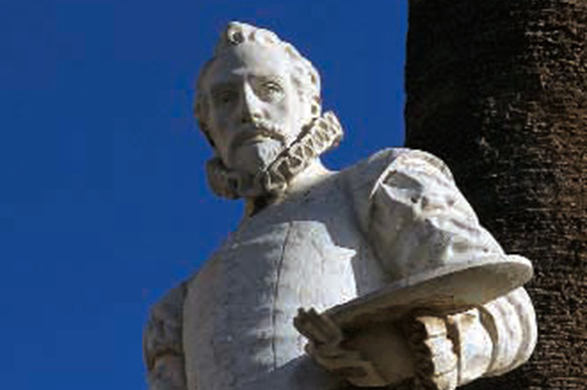 The Modernista artists were keen to open themselves up to Europe and its cultural movements and Rusiñol and the group around the magazine L’Avenç organised the Second Modernista Festival with this object in mind. Taking the Belgian creators as reference point and in close collaboration with Enric Morera, who had trained as an artist in Brussels, they staged The Intruder, a work by the young Belgian playwright Maeterlinck, at the Casino Prado theatre. Music featured prominently at this Festival and there was a concert with works by César Frank and Enric Morera.

The Third Modernista Festival, borne along by confidence in the victory of Modernista ideals, was held in November 1894 and was very different from the other two. The events comprising the Festival were a procession bringing two paintings by Doménikos Theotokópoulos, El Greco, to Sitges and the official opening of Cau Ferrat, Rusiñol’s studio. The procession, organised by Rusiñol, was a demonstration of the excitement Rusiñol and his friends experienced at the sight of the works by El Greco, which they felt they had to show in popular fashion. These paintings, which Rusiñol bought from Pau Bosch in Paris, are now in the Cau Ferrat Museum. Once Cau Ferrat had been officially opened, a lunch was held nearby, at La Torreta, on the rocks, and then, after a speech by Rusiñol, a literary competition began during which Joan Maragall recited his “decadentist” verses, which were later to be regarded as the beginning of a new genre of poetry.

Music was the star of the Fourth Modernista Festival which took place on 14 February 1897, this time returning to the Casino Prado where a portrait of Enric Morera by Santiago Rusiñol hung in the foyer. The events began with a symphonic poem by Mercè Vidal, and the Canadian Dances by Paul Gibson, following which Rusiñol made a speech defending Modernista music. The Festival ended with the première of the opera La Fada (The Fairy), with a libretto by Jaume Massó i Torrents and music by Enric Morera. This was the most important event of the Fourth Modernista Festival.

Sitges Modernista Route
The Modernista Route allows you to discover the imprint Modernisme left on Sitges as a result of the initiatives by Santiago Rusiñol and the wealth of the so-called americanos - local people who returned from the Spanish colonies having made their fortunes and embellished the streets of the town with their Modernista-style houses.

The Route begins at the train station, the symbol of the new era and the country’s modernity. It continues along the streets running through the town centre -Carrer de l’Illa de Cuba and Carrer de Francesc Gumà- where you can discover the Modernista constructions of some of the most outstanding architects of the time, such as Gaietà Buïgas, and where you can enjoy the decoration of some of the frontages (wrought iron work, ceramics, sgrafitti, stained glass windows, etc.). The buildings here include Casa Bonaventura Blay (1901), Casa Manuel Planas (1908) and Casa Pere Carreras (1906). If at all possible, you should take a look inside the Teatre Prado, a Modernista building where two of the Modernista Festivals organised by Rusiñol in Sitges were held and a meeting point for many of those involved.

The Route continues with a visit to a blue courtyard, the sole surviving example of the once typical Sitges courtyards, which was a source of inspiration for Rusiñol, who not only painted several pictures of it, but also based a play on it entitled El pati blau (The Blue Courtyard). You continue along Cap de la Vila to see another of the Modernista houses, one that once belonged to the americano Bartomeu Carbonell i Mussons. Next you come to Plaça de l’Ajuntament where the principal constructions are the Town Hall, featuring a Neo-Gothic style much used by the Modernista artists, and the market, the first Modernista building in Sitges.

The visit ends at the Cau Ferrat Museum, which was once the house-cum-studio of artist and art collector Santiago Rusiñol. Inside there is a large number of paintings by El Greco, Ramon Casas, Ignacio Zuloaga, Picasso and Rusiñol, among many others, as well as an extensive collection of wrought iron, ceramic and glass items.

Maricel Office: Monday to Friday, from 9am to 2pm and 4pm to 6.30pm. From June through September, daily from 9am to 9pm . Scheduled visits every Sunday. Visits only start if the group is at least 5 people. Groups may book private visits for any day all year round.