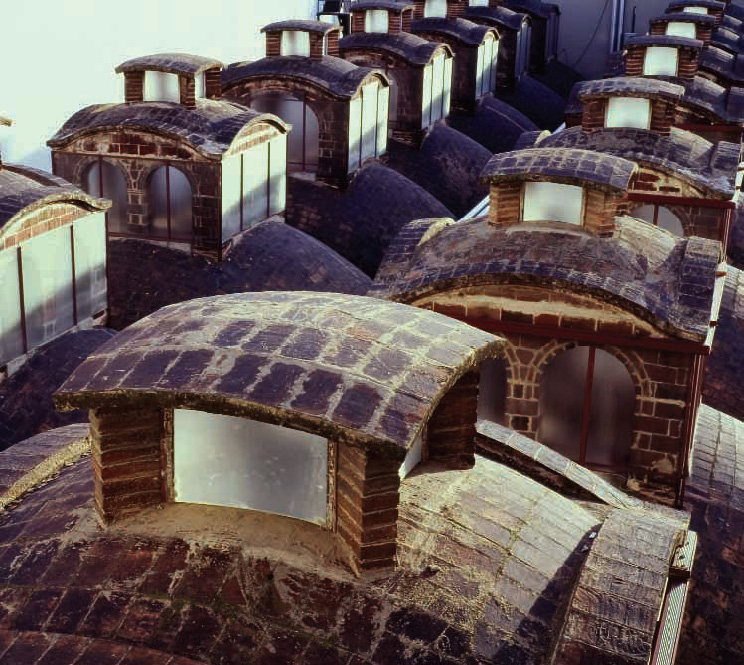 Major transformations occurred in the development, demography and society of the town. Terrassa expanded beyond its medieval structure towards Estació del Nord and, more importantly, by the early 20th century it had broken out of its traditional natural watercourse boundaries, Riera del Palau and Torrent de Vallparadís.

The usual idea of industrial heritage includes the most emblematic buildings where the industrial processes were actually carried out. In the case of the textile industry, this heritage comprises the chimneys, the steam-powered factories, the mills and the warehouses.

Terrassa is the Catalan city where the largest number of items belonging to its textile industry heritage are still in existence. This concerns not just to the buildings recognised as being industrial as such, but also the development and creation of a town that grew out of a medieval structure, with everything that entails. All this can be seen in the layout of the streets, in the number and location of the steam-powered factories, in the mills and warehouses, but also in the workers’ dwellings -with all their different types and particular characteristics- and in the facilities set up to service industry and inhabitants, such as the railway station, the banks, the electricity supply, the hospital, the market, the hotels and the schools. It can even be seen in the spaces dedicated to supplying food and other services, or leisure and recreation, such as shops, chemists’, tobacconists’, fire stations, the casino, clubs, choral societies, cinemas and theatres. And it can also be seen in some of the items of street elements or the streets themselves with their cobblestones, pavements, lampposts, electrical items and carriage entrances.

Many of these industrial elements have survived in Terrassa to this day. Some of them are quite interesting taken separately, but overall they represent one of the most outstanding collections of industrial heritage in Catalonia.

Modernisme in architecture is generally characterised by the predominance of curved lines over straight lines -the use of parabolic and elliptical arches, the Catalan vault in the space between girders, and rounded edges-, the wealth and detail of the decoration, the frequent use of vegetable motifs and the dynamism of the shapes. The most commonly used materials are plain brickwork (although stucco and stone are also to be found), decorative ceramics, wrought iron and sgraffiti. These general features also apply to Terrassa, especially in the essentially practical and functional aspects of the use of the buildings. The exterior decorations are usually austere, whereas the interiors are finely decorated with ceramic banisters, leaded stained glass, woodwork and ironwork.

The local exhibition at the Real Colegio Tarrasense in 1883 marked the start of the renovation of the plastic arts in Terrassa. This initial boost paved the way for the introduction of new artistic currents imported from Europe that arrived via Barcelona: Art Nouveau and the Modern Style. The highpoint of this new Modernista style in the town was the exhibition at Palau d’Indústries (now Escola Industrial) in 1904 with the applied arts particularly prominent. Local artist Joaquim Vancells and Alexandre de Riquer from Barcelona made a decisive contribution to the spread of Modernisme to painting and ornamentation in Terrassa.

However the extension and spread of this style in the city are due to the architects Lluís Muncunill and Josep M. Coll i Bacardí, and, to a lesser extent, Melcior Vinyals and Antoni Pascual i Carretero. It was these professionals, together with builders and craftsmen, who transformed the city with public buildings, factories, warehouses and private dwellings. This transformation occurred at the same time as the industrial development and the cultural and artistic concerns of the bourgeoisie of the moment. This style survived in Terrassa practically until the 1930s, beyond the limits usually attributed to the movement.

Outstanding among the early Art Nouveau works in Terrassa are the plans for the assembly hall of the Industrial Institute, with mural paintings by Alexandre de Riquer (1901) that were finished by Joaquim Vancells (1904) following a disagreement with the Institute. The decoration by Vancells remains in place and the central painting, by Riquer, is today in the dining room of Casa Alegre de Sagrera. The versatile Joaquim Vancells has also left us several projects in this style: the furniture in the dining room and office of Masia Freixa, the paintings on the stairs of Casa Alegre de Sagrera and the overall design of Confiteria Vídua Carné. The rooting of the Modernista style in Terrassa as applied to the town’s industrial heritage is linked to the work of the most prolific local architect of the period: Lluís Muncunill.

The “Industrial and Modernista Terrassa” Route

This Route includes the town’s 25 most representative buildings and monuments. Since they are all fairly close together, they can be visited on foot in half a day. The former Vapor Aymerich, Amat i Jover, once one of the most spectacular factories in Europe and now home to the Museum of Science and Technique of Catalonia, was designed by Lluís Muncunill (1907). It still has a very impressive 11,000 square metre bay, the engine room, the chimney and the old coal bunkers. This former steam-powered factory shows you what the world of the workers and industry was like at that time before going on to buildings that bring you closer to the daily life of the city and its bourgeoisie. Next you go down Rambla d’Ègara to Mercat de la Independència (1906), which has a metal structure and remarkable wrought iron decoration. Continuing along Raval de Montserrat you come to the former Confiteria Carné, originally a sweet shop, now a chemists’ called Farmàcia Albiñana, and an extraordinary example of Modernista decorative arts; the former headquarters of the Societat General d’Electricitat (now converted into a restaurant); the Town Hall (l’Ajuntament), a Neo-Gothic-style building (1903). The former Industrial Institute and Magatzem Cortès i Prat (1897) are the most noteworthy buildings until you come to Casa Alegre de Sagrera. This building (dating from the early 19th century, but renovated in 1911 and now part of the Museum of Terrassa) was the residence of an old family of industrialists and is an example of an extremely eclectic Modernista style. The outstanding interior features include paintings by Joaquim Vancells i Pere Viver, woodwork, leaded stained glass and glass work, and the great Modernista paintings by Alexandre de Riquer in the dining room. A visit to Gran Casino (1920), a recently restored sumptuous building, is a must. On the way to the building and gardens of the Industrial Institute (the former Pasqual Sala store, 1893) you will see various houses that retain the spirit of the industrial Terrassa of a hundred years ago: Casa Concepció Monset, Casa Baltasar Gorina and Cases de Cal Maurí (a group of humble dwellings for workers, one of the few still remaining in Catalonia). The Teatre Principal is another landmark on the route through Modernista Terrassa. This is a monumental building erected in 1911. Old stores and houses (Magatzem Francesc Roig, Magatzem Emili Matalonga, Casa Jacint Bosch, Magatzem Joaquim Alegre, Magatzem Torras, etc.) accompany you on your way to Carrer de la Rasa, where you will find the section of the Ventalló factory, which has been converted into a public space and a residential area including a square with arcades, the Marcet i Poal factory (1920) and warehouse (1914), and, finally, the section of the Izard factory (1921), a spectacular building that opens onto Plaça Didó and is now home to the Sala d’Exposicions Muncunill (Muncunill Exhibitions Hall) in what was once the factory’s dyeing room. The route ends in the middle of Parc de Sant Jordi at Masia Freixa (1905-1910), the former residence and also factory of the Freixa family, designed by Lluís Muncunill.

Tour starts at 10.15am at the Terrassa Tourist Office (Masia Freixa), and lasts approximately 3 hours.

Children up to 7 years of age: free.

Discount of the Modernisme Route: 30% off the price of the guided tour.

Guided tours for travel agencies, entities, companies, institutions, associations and others groups. Any day of the week, except Mondays.


The schedules may suffer variations, so it is advisable to check them in advance. Consult the discount of the Route on the website www.rutadelmodernisme.com or by calling tel. 902 076 621.